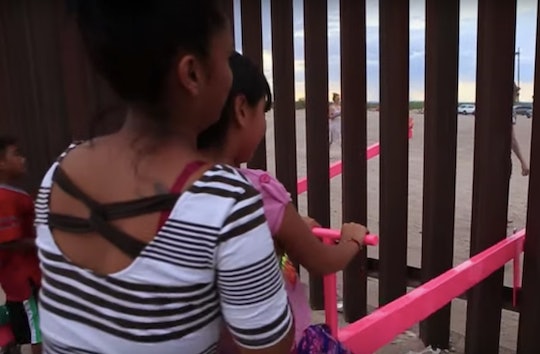 While most news from the border is distressing to hear and read about, some have found a way to bring happiness to children caught, quite literally, in between it all. This week, two professors from California installed brightly colored border wall seesaws that let kids on both sides of the U.S.-Mexico border play together. And the videos of children coming together for a joyful moment, despite having a barrier between them, are truly moving and heartwarming to see.

The bright pink seesaws were installed along the steel fence outside El Paso, Texas on the U.S. side and Ciudad Juarez on the Mexican side, according to The Guardian. The seesaws were created by Ronald Rael, a professor of architecture at University of California, Berkeley, and Virginia San Fratello, an associate professor of design at San Jose State University, according to Newsweek.

On Monday, July 29, Rael shared several videos and photos on his Instagram after the installation, calling it "one of the most incredible experiences" of his career and said witnessing all of it come to life was a moment filled with "joy, excitement, and togetherness." Rael's videos on Instagram, which have been widely shared on Twitter, shows adults and children alike riding together on the seesaws.

"The wall became a literal fulcrum for U.S. - Mexico relations and children and adults were connected in meaningful ways on both sides with the recognition that the actions that take place on one side have a direct consequence on the other side," Rael wrote on Instagram, adding a thanks to "everyone who showed up on both sides."

The Refugee and Immigrant Center for Education and Legal Services (RAICES) based in Texas called the border wall seesaw installation a poignant reminder that "we are all one."

"Art is such a powerful vehicle for change," RAICES wrote in a tweet on Monday. "A beautiful installation at our southern border reminds us that: 'Actions that take place on one side have direct consequences on the other,'" the organization continued, quoting Rael. "We are all connected. We are all one."

More videos of the seesaws in action have been shared on social media and YouTube, including one shot from the Mexican side of the border. In a video shared by AFP News Agency on Twitter, a mother holding her baby while standing near the border wall says in Spanish, "It's really sad that something like a barrier separates us because there are Mexicans on that side of the border just as there are Americans on this side and wonder what we can do to see each other."

Rael first discussed the idea of building seesaws along the border, which he called his "Teeter-Totter Wall," in a book he wrote called Borderwall as Architecture: A Manifesto for the U.S.-Mexico Boundary, according to the University of California Press blog.

While the installation has certainly moved many, President Donald Trump and his administration's immigration policies are still a concerning reality for many. For instance, as Politico reported earlier this month, the Trump administration recently finalized plans to "bypass immigration courts and deport undocumented immigrants who can't provide proof they've been continuously living in the U.S. for two or more years."

In the midst of messy politics and harmful policies, it's important to remember the humanity all of us share, no matter what your passport says, and these pink seesaws are a lovely reminder of just that.

More Like This
Can States Ban The Abortion Pill? FDA Rules May Make That Hard
Family Of Grandfather Killed In Highland Park Mass Shooting Say He "Saved" Their Lives
Lauren Conrad Shares Experience With "Lifesaving Reproductive Care" After Ectopic Pregnancy
Ketanji Brown Jackson Spoke Directly To Her Daughters In Her Powerful Opening Statement