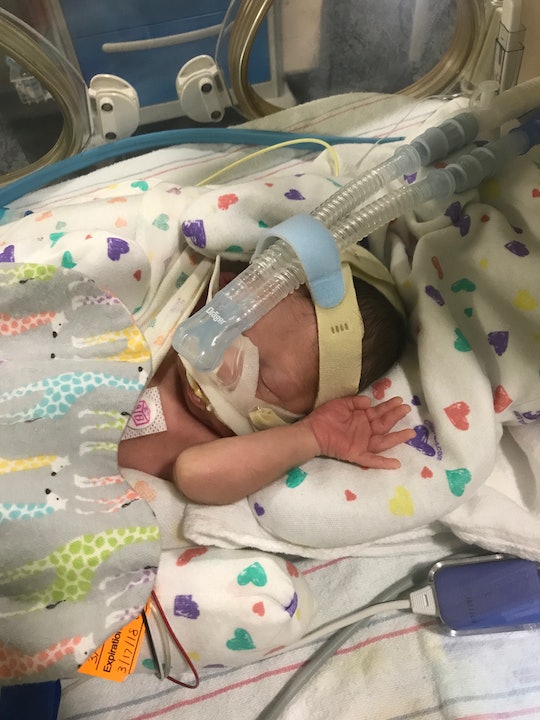 When You Can’t Feed Your Baby, You Lose Something Important

I come from a large Italian Jewish family that loves to talk loudly about eating and cooking almost as much as we love to eat and to cook. Giving birth to a child who could not eat was terrifying, both in the obvious way but also in a deeply emotional sense. When I went into premature labor with my second son at just 29 weeks, I knew my baby would face many early challenges: that he may be too frail to even survive, that if he did, he’d live weeks, even months, in the NICU, that he’d likely have difficulty feeding and growing, and that he possibly could face developmental delays — all of these the well-known obstacles in the vast unknown of premature birth. What I never expected was that my son would literally be unable to eat: within hours of his birth, it was discovered that his esophagus did not connect to his stomach. In an early postpartum haze of shock and medication, I got a crash course in tracheoesophageal fistulae and esophageal atresia (also known as TEF/EA), a condition that affects approximately 1 in 4,000 pregnancies. I learned that, even with immediate surgery that often has good success rates, many babies with his condition have tenuous roads to eating normally.

In my family, it is axiomatic that food equals love. Having already been through the tough but rewarding first year of life with my older son, I also knew that feeding is how you really bond with an infant. Whether you’re nursing or giving a bottle, there’s nothing like seeing a loving set of eyes look up at you while a tiny fist tightens around your finger — belly full and heart content. What if my baby was never able to eat normally? What kind of sad fate would it be to have been born into my family, yet be unable to taste Nonna’s osso buco, Mom’s pasta alla checca, Uncle Alex’s bolognese, or Aunt Brooke’s brisket?

Our infant, still nameless, was transported to a children’s hospital, operated on, and sent to convalesce for 95 days in their specialized, surgical NICU, where, much like a delicate pastry, he’d wind up under heated glass for a few weeks.

When I was officially proclaimed to be in early labor in late February of last year — 11 weeks shy of my May due date and, quite cosmically, on the very day of my older son‘s third birthday — the first thing I did was make arrangements to have someone pick up his custom-made birthday cake. (I make a mean risotto, but desserts aren’t my thing.) Five-minute-apart contractions be damned, I wasn’t going to allow him to be deprived of his double-chocolate, five-layer buttercream deliciousness!

A few hours after our newborn son came into this world weighing approximately as much as a bunch of bananas, we were told of the suspected abnormality. The director of the NICU, a sweet, gentle neonatologist, tried his best to assure me and my surgeon husband — who was already deep into statistics and peer-reviewed journal articles on prematurity — that the outlook for our son was good. The next two days were a blur as our infant, still nameless, was transported to a children’s hospital, operated on, and sent to convalesce for 95 days in their specialized, surgical NICU, where, much like a delicate pastry, he’d wind up under heated glass for a few weeks.

In the meantime, I ate for both of us, emotionally at least; ever after surgery, he could not actually eat yet, and was being sustained by TPN — total parenteral nutrition — a mixture of protein, carbs, glucose, fat, vitamins and minerals fed to him intravenously via two wholly unappetizing looking bags of fluid, one white and another yellowish clear. Meanwhile, I diligently pumped my breast milk every three to four hours around the clock, anxiously awaiting the day we could actually feed it to him.

It still stings to think back to our first few weeks together.

When I wasn’t pumping, I was eating. And when I wasn’t eating, I was cooking. Not just to sustain myself, but because it gave me a sense of control when things seemed very much out of my control. I made pasta carbonara for my three year old, his favorite. Together, we made green smoothies for snack and banana pancakes on Sunday mornings. I hosted a Passover seder while our baby was still in the NICU, followed by a “not-Bris” a month after he finally was discharged. We decided to spare him the ritualism and do the deed while he was still in the hospital, so at home it was all lox and whitefish. (All of the pomp, none of the circum...cision.)

Later in the year, we wound up hosting Rosh Hashanah, Halloween, Thanksgiving, Christmas Day and New Years’ Eve (resolution for 2019: less hosting.) Somewhere between the matzah ball soup and the challah, date, and pistachio stuffing, I started to feel a little more like myself. And somewhere between Ottolenghi’s roasted eggplant with buttermilk sauce and shingled sweet potatoes, our baby began to eat real food: carrots, pears, avocado, salmon, veal. He’s proven himself to be quite the foodie already; in fact, he only seems to cry when a bottle or a spoon is in full view and not in his mouth.

It still stings to think back to our first few weeks together, when I was consumed with anxiety and guilt. I feared I had done (or not done) something to cause his abnormality. I feared our baby would not just come home with a tube in his nose that snaked into his stomach, but that it would stay there for months or years, and that he would never know the joy of a slice of pizza or a freshly baked chocolate chip cookie. I was desperate to be able to just feed him successfully, whatever that looked like. Most of all, I worried that — in growing into a family of four — we had simply bitten off more than we could collectively chew. Now, thankfully, our baby can chew for himself.