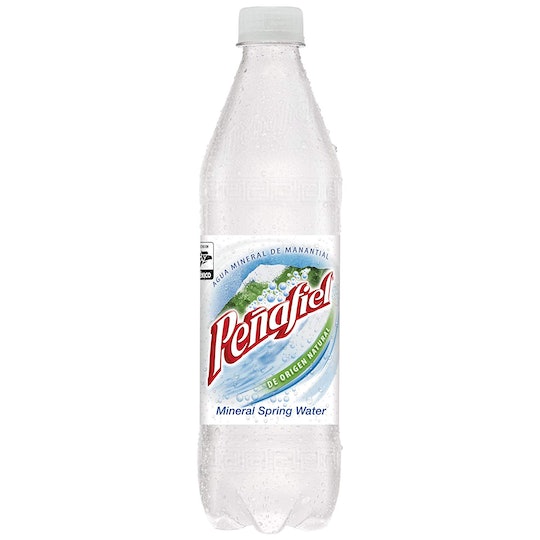 A Popular Bottled Water Brand Has Been Recalled For Arsenic Contamination

Staying hydrated is important. After all, the human body is more than half water. But what if the stuff you're using to wet your whistle is causing more harm that good? It's time to take a look at where your water comes from, because a popular bottled water is being recalled for arsenic contamination. The brand, Peñafiel, is being pulled off shelves indefinitely.

After a Consumer Reports lead investigation revealed that 11 out of 130 brands of bottled water contained some level of arsenic, Peñafiel bottled water is being recalled due to levels that exceed the federal limit, according to NBC News. The recall includes the brand's unflavored mineral spring water products, which are exported from Mexico. This includes 600mL and 1.5L of all date codes, according to the FDA.

Parent company Keurig Dr Pepper Inc. announced the recall Friday. Company spokesperson, Kate Gilroy, did not not disclose how many cases this would affect, but did say that the bottles were distributed to Walmart, Target, and possibly other retailers, according to the New York Times.

The elevated levels were found in samples conducted by independent laboratory testing and exceeded the acceptable amount of 10 ppb, although the exact number was not given, according to a company statement.

No other Keurig Dr. Pepper products are affected by this recall.

Consumers can return the product to it's place of purchase for a full refund. Any other questions can be directed to the Keurig Dr Pepper Consumer Care hotline at (800) 696-5891 between the hours of 9:00 am and 8:00 pm EST, Monday through Friday.

Arsenic is a naturally occurring semi-metal found in ground water. Too much arsenic can result in arsenicosis, or arsenic poisoning, according to Medical News Today. And, it can lead to some pretty scary stuff — including high blood pressure, reproductive harm, diabetes, coma, cancers or even death, according to Heathline. Small amounts of ingested arsenic will build up over time to create a poisonous level for the body and can affect the skin, liver, lungs, and kidneys. Symptoms include headache, confusion, dizziness, and extreme diarrhea.

Infants, young children, older adults and people with weakened immune systems are more susceptible to the affects of arsenic poisoning than others, according to Food and Safety News.

Despite recent movements to reduce single use plastics to save the environment, bottled water surpassed soft drinks in popularity last year. Americans drank 13.8 billion gallons of bottle water in 2018, according to the FDA.

But in some cases, bottled water is really just tap water relabeled and sold at a much higher price, according to Mind Body Green. Plus there is a risk of the plastic bottles leaching microplastics into the water that you will eventually drink. Yuck.

If this makes you leary about bottled water in general, you aren't alone. But is tap water any safer? It might be, but to truly know you can do an at home test to discover various levels of arsenic and other contaminants through tests like mytapscore.com and others.

Even with all the recent recall news, it's still pretty scary to have something as basic as water recalled for safety reasons. Stay hydrated... but be smart about where you water comes from.