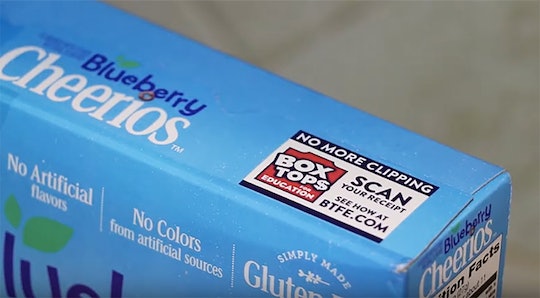 It's a good day for parents of school-aged kids. That's because there's a new Box Tops app, which means you no longer have to painstakingly clip your cereal boxes. Considering back-to-school season is officially here, this news couldn't have come at a better time.

As parenting website Momtastic noted, General Mills (makers of my family's mainstay, Cheerios) came up with an incredible idea to help parents with fundraising this school year and beyond. But first, a little history: This educational fundraising hack, officially called Box Tops for Education, kicked off in 1996 by General, originally aiming to boost funds for California schools, according to website SheKnows.

The program was a smashing success and, by 1998, over 30,000 schools nationwide were clipping their cereal box tops to help bridge the gap in funding for everything from books to playground equipment, with some $719 million having been earned in this program by 2107, according to SheKnows. Each box top is worth 10 cents, by the way. And while a dime doesn't sound like a ton, it really does add up over time.

Throughout the program's successful run, additional brands joined the the program, including:

Of course, keeping track of tiny box tops isn't easy when you're a busy parent. And remembering to send those pesky little box tops into school? Sheesh, forget it.

But now things are about to get a lot easier for moms like me. That's because General Mills launched an app to keep track of and redeem your box tops, a program you can easily add on your iPhone. How it works is this: the app scans your grocery-store receipt for you, finds the participating products, and then credits your school's earnings online, according to General Mills' press release. You can download the app from either Apple or Google Play — but just make sure you log your receipts within 14 days of purchase.

Even better news? You can still participate the old fashioned way, clipping physical cereal boxes to your heart's desire. And it's worth nothing you can clip and use the app at the same time. It's all up to you.

As for why General Mills decided to take the plunge now? Erin Anderson, the manager of Box Tops for Education, explained in a press release about the app:

Box Tops for Education has made a significant impact in school fundraising over the last 23 years, and we’re evolving the ways schools can earn cash. Modernizing Box Tops to fit the needs of today’s families brings the next generation of supporters and brands into the program, so we can stay true to our mission: to help schools get what they need.

Now parents like me will have an easier time participating, which means I can stop feeling guilty and finally get excited about the rewards incentives that are included in this drive. Speaking of incentives, there's an opportunity for five schools to win $25,000 and one school to win a $20,000 makeover. It's a win-win all around.

More Like This
How To Make Santa Footprints
The 35 Top Toys For 3-Year-Olds
The Best Toys For 3-Month-Olds
Gemini, 2023 Will Be A Year Of Slow & Steady Changes