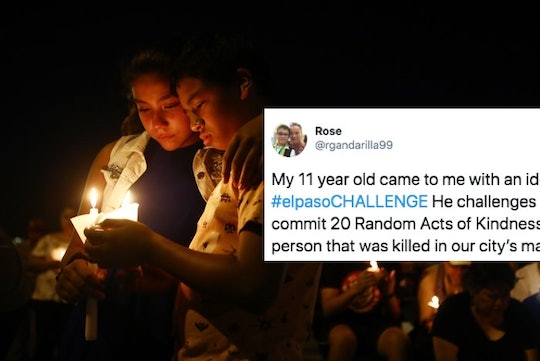 The city of El Paso, Texas is still reeling after a gunman opened fire inside a crowded Walmart, killing 22 and injuring more than two dozen others. In the difficult days since, people in the area and the surrounding areas have come together in remarkable ways to show their support for their community. Like Ruben Martinez, an 11-year-old boy who created the #ElPasoChallenge in the aftermath of the horrific shooting to try and help the city heal with acts of love and kindness.

The challenge is simple: just be kind, as the boy's mother, Rose Gandarilla, shared on Twitter. "My 11 year old came to me with an idea. #elpasoCHALLENGE," Gandarilla tweeted on Aug. 4. "He challenges ALL El Pasoans to commit 20 Random Acts of Kindness. One for every person that was killed in our city’s mass shooting. Let’s get this done El Paso." According to ABC News, as of Monday, the death toll had raised to 22.

As the mastermind behind the heartwarming challenge, Ruben shared some suggestions for how to get involved. According to Gandarilla's post on Twitter, which included a handwritten letter from Ruben, you can do anything, such as mowing a neighbor's lawn, visiting someone in a nursing home, paying for someone's meal or coffee, donating to people who need it, bringing flowers to a patient in a hospital, complimenting someone, leaving a dollar in a vending machine — it doesn't matter. The goal is, simply, to be kind to one another.

Gandarilla told CNN Ruben came up with the idea after facing his own anxiety after the El Paso shooting, sharing with the news outlet that he no longer wanted to shop at stores, out of fear for his own safety. "He was having some trouble dealing with what happened," Gandarilla told CNN. "I explained to him that we could not live in fear and that people in our community are caring and loving. I told him to try and think of something he could do to make El Paso a little better."

So Ruben went off to his room and came back with this brilliant idea, as Gandarilla shared with CNN. He decided to start with his own heartwarming act of kindness; according to CNN, the thoughtful 11-year-old "chose to go deliver dinner to our first responders."

Since sharing it on social media over the weekend, the challenge has spread quickly across Facebook and Twitter, with people sharing their acts of kindness or expressing their excitement about the idea.

"Act of kindness #1 getting a drink for a coworker!" one person tweeted on Tuesday.

"I accept - The wisest of people are sometimes the very youngest," a third person tweeted. "We can do this."

Ruben isn't the only one working to bring healing after the El Paso shooting, which authorities are investigating as "domestic terrorism," according to the BBC. Texas Baptist Men, a group that comes together in the wake of tragedy or disaster, deployed hours after the horrific shooting to organize donations and hand out water to first responders, according to NBC News. "We've got to become better and not bitter," Glenn Pennington, a member of Texas Baptist Men, told the outlet. "It is tough, but you know, one thing about El Paso, they are resilient... We're family-oriented. We believe in community."

Healing after a tragedy of this scale isn't easy. Many are undoubtedly feeling overwhelmed by sadness, fear, and unspeakable grief right now. But as 11-year-old Ruben has reminded us, there are things you can do to help make a difference during this difficult time and little acts of kindness can go a long way.

More Like This
Robb Elementary School Is Set To Be Demolished After Deadly Shooting
Lauren Conrad Shares Experience With "Lifesaving Reproductive Care" After Ectopic Pregnancy
Ketanji Brown Jackson Spoke Directly To Her Daughters In Her Powerful Opening Statement
Meghan Markle Calls On Men "To Be Vocal" In The Aftermath Of Roe v. Wade Ending