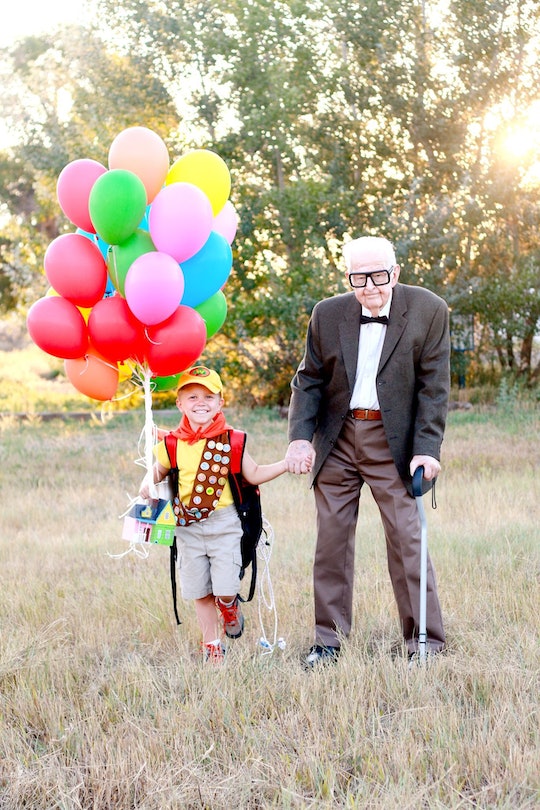 Wow, This Boy & His Great-Grandpa Couldn't Look More Like Russell & Carl From 'Up'

Every once in a while, a photo will grace your news feeds on social media and totally stop you in your tracks. And seeing these photos from a young boy and his great-grandpa's photo shoot inspired by Up is definitely one of those moments. Truly, I'm not convinced Pixar wasn't inspired by this sweet duo for the main characters in the beloved 2009 movie that made countless people weep.

Up is one classic Pixar film that takes viewers on a wonderful roller coaster ride of emotions. And since it's been 10 years since the movie first premiered (Do you also feel old right now?), here's a refresher. In the film, Carl, an elderly balloon salesman with a desire to travel the world does just that by tying thousands of balloons to his home. Carl later learns that he isn't alone when he finds an 8-year-old wilderness explorer named Russell stowed away on his front porch. Together, the two embark on the greatest adventure of their lives. The film not only serves as a great inspiration for people to go out and live their lives to the fullest, but it also has inspired some pretty amazing recreations of the two main characters, including an incredible photo shoot that's gone viral.

Colorado photographer Rachel Perman did just that when she staged a perfect Up inspired photo shoot with her 5-year-old son Elijah and his 90-year-old great-grandfather, Richard Bain. In the photos, Elijah can be seen wearing a perfect replica of Russell's wilderness explorers uniform, holding a bouquet of balloons with a small house attached to them. Meanwhile, Richard's resemblance to Carl is uncanny.

Really, these two could not look any more perfect together.

Elijah's sweet smile is contagious. And it makes sense he's so happy in the photos — he loves Up, Perman tells Romper, adding that Elijah was thrilled and surprised when his great-grandfather dressed up as Carl and his great-grandmother, Caroline, dressed up as Ellie from the movie.

Although his great-grandparents had never seen Up, according to Perman, they were "thrilled to participate" in the shoot, which was held in honor of Elijah (and his twin sister Emilee)'s birthdays. Perman says Elijah's great-grandpa "even went to the thrift store to get the jacket and the hose." How sweet and how clever!

Since sharing the photos to her Facebook page on Wednesday, Sept. 11, the post has gone viral, amassing more than 1,000 likes and hundreds of comments in two days. And it's easy to see why — Elijah and his great-grandpa look so much like their original inspiration, you may have to do a double-take!

And unsurprisingly, people are obsessed with these photos. "These are spectacular — you made us smile by sharing these!" one admirer wrote. "They came out amazing!" another commented. "And I love that the great grandparents got to be a part of it!! Melts my heart."

Perman tells Romper that while she didn't expect these photos to go viral, she's just happy she and her sweet family could be able to bring a smile to someone's face. And they most certainly have.