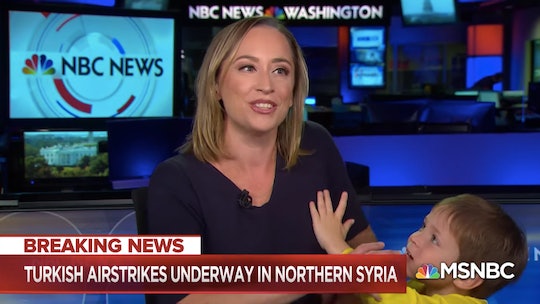 Is it just me, or do kids seem to hone in on the fact that you're in the middle of an important phone call, and purposefully choose that 10-minute span of time to have a meltdown? Or to yell loudly about going poop? Phew! Glad I'm not alone in this department. Which is exactly why seeing this boy hilariously interrupt his mom's news broadcast is so relatable.

On Wednesday morning, NBC News' national security and Pentagon correspondent Courtney Kube handled an adorable interruption by her young son like the bad*ss working mom and rockstar she is. To set the scene, Kube was in the middle of a breaking news broadcast about the Turkish military's offensive in northern Syria, according to E! News, when one of her 4-year-old twin sons, Ryan, meandered onto the set and started adorable trying to get her attention. Kube paused her report and acknowledged, "Excuse me, my kids are here. Live television," before picking back up where she left off.

This busy mama handled the awkward situation very professionally, if you ask me. (I know I would have been freaking out.) Kube later shared with Today what was going through her head when Ryan came up to her on live TV. "As soon as I realized he was standing next to me, for a second your heart kind of stops," she explained. "I almost picked him up and put him on my lap, but I was afraid he would lean back against mic." She made another good point, adding, "I was so glad he didn't start crying. He was smiling and happy. It could've been worse!"

NBC News correspondent Julia Ainsley — one of Kube's coworkers at the network, tweeted, "Mother of twins and best on the beat. @ckubeNBC does it all."

One person commented, "I think it’s fantastic that she’s allowed to have her kids around while working. Good on you MSNBC."

Another Twitter user chimed in with, "This made me smile this morning... I’d like to see this more often."

Yet another person wrote, "MSNBC, thank you for highlighting this sweet moment and supporting your working moms."

You know, this reminds me of a similar kid on-air cameo that went viral back in 2017. Professor Robert Kelly was speaking about the impeachment of South Korea President Park Geun-hye live on BBC News when he was interrupted by not one child — but two of them. First, Kelly's young daughter came waltzing into the room behind him on live TV. Although Kelly attempted to gently push her behind his chair, his attempt to make the interruption low-key was soon destroyed when his son zoomed in his walker — soon followed by his wife, who practically skidded to a stop in the background in an attempt to quickly corral their kids.

“She was videotaping the interview so we could have a clip of it, and the kids sort of escaped and I had foolishly not locked the door,” Kelly said of his wife, Kim Jung-A, according to USA Today. “It’s really all my fault for not locking the door.”

LOL. Again, I'd like to give props to both Kube and Kelly for their ability to remain calm and collected in the midst of their kids crashing their live TV reporting. It definitely makes me feel better about my children chanting, "I farted!" while I'm attempting to refill a prescription by phone.