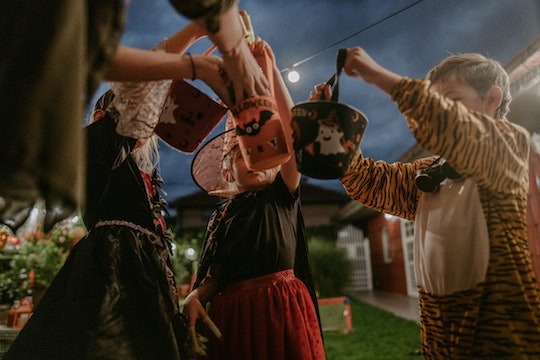 Halloween is the one time of year where people give without expecting anything in return. Friendly people are used to handing out massive amounts of candy without needing anything back. But let's be real, someone has to eat the candy, and kids are more than happy to do so. But one kid changed this conversation this Halloween. It's wonderful to see this boy put his Halloween candy in a stranger's empty bowl, proving that treats aren't everything. And the end of the day, it's kindness that counts.

As a kid, the only thing better than getting a full sized candy bar on Halloween is coming across a full bowl of candy outside of someone's home with no one around to guard it. There is no better feeling than having the opportunity to take two (or three or four) pieces of candy without anyone looking (or judging). But, some people might take advantage of this opportunity by taking more than just a few pieces or taking half of the bowl of candy, instead.

But one 8-year-old boy from Maryland, Jackson Champagne, did the opposite of this. When he came across an empty bowl of candy on neighbor, Leslie Hodges' doorstep, he got rid of his own hard earned pieces to fill the bowl, instead, according to the Washington Post. Hodges' smart doorbell (equipped with a camera that records movement) was able to capture Champagne's act of kindness, which went viral in a matter of hours.

The video has amassed more than 9 million views in the 24 hours since Hodges posted the video from Halloween night onto her Facebook page. And that is so awesome.

"Caught this on our Nest camera...," Hodges wrote in the caption of the video. "This has got to give hope to everyone that there are still amazing people in this world. What a selfless act from this little guy! Kudos to his parents!!"

Although Jackson was dressed as a vampire for Halloween, he didn't suck all of the candy out of his bowl. He did the opposite, which is reportedly a normal occurrence for Jackson. Jackson's parents told the Washington Post that they're well aware that their son is so sweet. "That's the type of kid that Jackson is," Jackson's dad, Ty Champagne, said. "He's always giving. He's a very sweet, kind, and soft-spoken kid. I've never seen a moment where he acts negatively to humanity."

Many commenters on Facebook are saying that Jackson is restoring their hope in humanity — the act of his selfless giving says a lot, especially on Halloween.

"That kid is amazing!!," one commenter wrote on Facebook.

"We need a world filled with people with a heart like this!!," another commenter added.

And Twitter users are thinking the exact same thing.

Champagne told The Washington Post that he and his son plan on meeting Hodges soon so she can reward him for his kind spirit with a gift card to his favorite store, Target. Although Jackson didn't know he'd become a viral sensation over night, his dad always had a feeling that his run in with fame would come. He's just happy this moment came with a very inspiring message.

Jackson is certainly getting his chance to be in the spotlight, but for the best reason possible — for a kind gesture meant to help the trick-or-treaters after him.