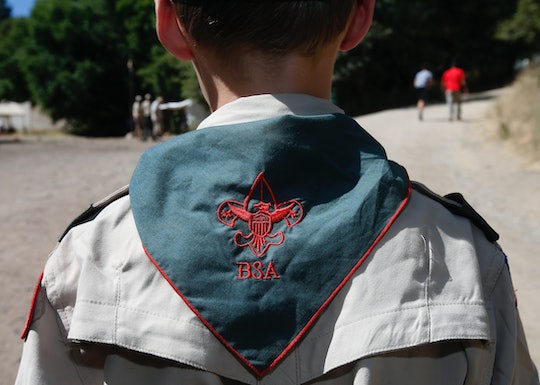 Transgender Boys Will Now Be Able To Join Scouts

After a hectic week of divisive federal politics, there might be hope of a little unity yet from communities on the ground. According to the Associated Press, the Boy Scouts will allow transgender children to join up, which is great news for families everywhere, as it means trans boys who want to join up with their friends will be able to — and kids everywhere will be exposed to more diverse environments that will affect them positively down the line. The more the merrier (and less hurt and stress for kids), right?

A spokeswoman for the organization made the announcement on Monday, saying that it was basing its decision on the fact that states and communities are changing the way they look at gender, and the Scouts were following suit. Up until Monday, the scouting organization only allowed children to apply based on the gender listed on their birth certificate. In contrast, the Girl Scouts of America have officially allowed transgender girls to join since May 2015, saying, "Our position is not new. It conforms with our continuous commitment to inclusivity."

Still, though, the Girl Scouts' official policy still says that admission is considered on a case by case basis. But "if the child is recognized by the family and school/community as a girl and lives culturally as a girl," she can join the organization. It's possible the Boy Scouts policy will be similar when it's added to their website.

The announcement comes on the heels of news that a New Jersey family was going to sue the organization for barring their transgender son from participating. Joseph Maldonado, 8 years old, was kicked out of his Secaucus troop late last year, even though the troupe leaders knew he had been living as a boy for a year. It wasn't until other parents complained that they kicked him out. His mother, Kristie Maldonado told Gay Star News, "‘I was in shock, upset. The kids didn’t have a problem, he was having fun." She added that none of the kids had a problem with Joseph.

Joseph was shocked, too. He said, "‘I had a sad face, but I wasn’t crying. I’m way more angry than sad. My identity is a boy." Joseph added, "If I was them, I would let every person in the world go in. It’s right to do."

Thanks to the new announcement, now Joseph will be able "to be where his friends are," as he said back in December after he was first kicked out, just ahead of the spring camping trips.

But more than that, he and his mom did a really brave thing by speaking up. Thanks to a society that's evolving to become just as open-minded as Joseph and so many other transgender individuals and allies, it seems the Boy Scouts of America are now ready and willing to follow suit.