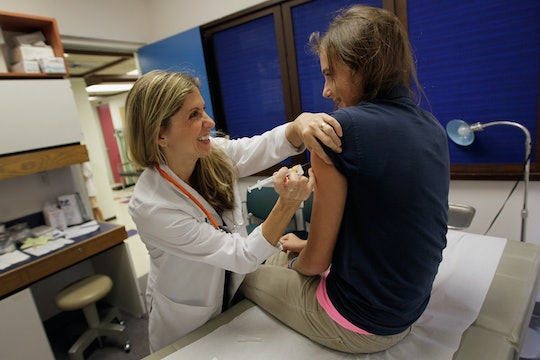 Here's Why Boys Aren't Getting The HPV Vaccine As Regularly As Girls, According To New Research

When the HPV vaccine was approved for girls in 2006, I remember being promptly sent to the doctor for all three shots — as were many of my friends. However, when the vaccine was approved for boys three years later, I don't remember quite the same collective rush to the doctor's office for that first shot. As it turns out, my vague high school memory of boys not being as concerned with getting vaccinated against HPV is actually pretty well-substantiated by newly-released statistics. A new study reveals that a smaller percentage of boys have gotten the HPV vaccine than girls — and the reason why is rather telling.

The study found that one reason boys are less likely to get the HPV vaccine than girls are is because of doctor recommendations, as reported by the The American Journal of Managed Care (AJMC). Health care providers appear to be offering the HPV vaccine to boys less often than they offer it to girls. Statistics from 2016 reveal that approximately 65 percent of girls had received the HPV vaccine (or at least the first of the three shots), while only 56 percent of boys had received the vaccine, according to ABC News.

Researchers made these conclusions based on data published by a 2015 national survey called National Immunization Survey-Teen (NIS-Teen) that tracks vaccination rates of 13- to 17-year-olds. The findings were then presented at the Society of Gynecologic Oncology 2018 Annual Meeting on Women’s Cancer in New Orleans over the weekend, according to AJMC.

The NIS-Teen survey also asked parents why their children did not get the HPV vaccine. Nearly 20 percent of boys' parents (one in five) said their child's health care provider had never recommended they get the vaccine. In contrast, around 10 percent of girls' parents (one in 10) cited the same reason. Researchers concluded that this means doctors are less likely to recommend the HPV vaccine to boys, which could account for the lower rates of boys receiving the vaccine.

In addition to doctors not recommending it, researchers found an even more common reason why parents did not get their kids vaccinated against the HPV infection, with similar statistics for both boys and girls. About 21 percent of girls' parents and 22 percent of boys' parents said they believe the vaccine is unnecessary, according to the study.

The HPV vaccine is necessary and important for people of all genders, as it helps protect bodies from the common human papillomavirus infection. Even though HPV is often regarded as a sexually-transmitted infection, medical correspondent Jen Ashton told Good Morning America that the disease can also be spread through something as simple as skin-to-skin contact. Therefore, it is recommended that all children and teenagers receive all three doses (ideally when they are around 11 to 12 years old) whether or not they are sexually active.

HPV can cause cancer and other diseases, according to the Centers for Disease Control and Prevention. Specifically, the HPV infection can cause cancers of the cervix, vagina, vulva, penis, anus, and the throat. The CDC explains that HPV causes approximately 30,700 cancers in people in the United States every year, and that the HPV vaccine can prevent about 28,000 cases.

So what can be done about this imbalance? One of the study's researchers, Dr. Anna Beavis, spoke with AJMC about how to make sure more parents understand the importance of getting the HPV vaccine. She told the journal:

It is clear that physicians need to give a strong recommendation to both parents of boys and girls... They also need to remind parents of the importance of getting all doses, which makes the vaccine the most effective in preventing HPV.

This new study proves that many parents have not gotten their kids vaccinated against HPV simply because they do not realize it is necessary — especially the parents of boys. If more doctors recommend the vaccination to parents, perhaps there will soon be less cases of cancer caused by HPV across the country.