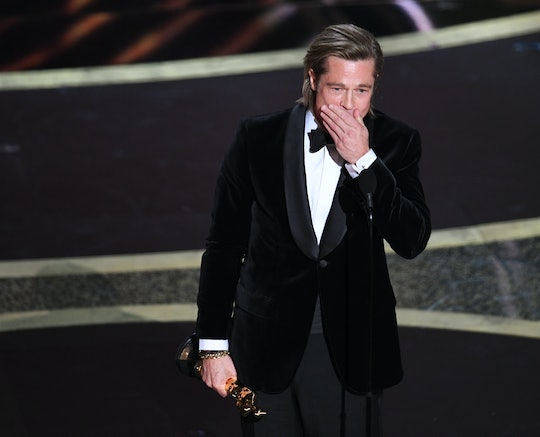 At long last, after years of award-worthy performances, Brad Pitt won his first acting Academy Award tonight for Best Supporting Actor (for his role in Once Upon a Time... in Hollywood, of course). Everyone knew his speech would be memorable, but when Brad Pitt blew a kiss to his kids, it might just have been the most memorable moment of the night thus far.

This wasn't Pitt's first nomination, or even his first win. He picked up a statue as producer on the Best Picture-winning Twelve Years a Slave, and was also nominated as a producer for Moneyball and The Big Short; in the acting category, he was nominated for Twelve Monkeys and The Curious Case of Benjamin Button. In other words, it's not like the 56-year-old actor was a stranger to the Academy Awards ceremony experience. Nor is he a stranger to the experience of winning awards (not after this season, which included wins at the Golden Globes and the SAG awards), which is perhaps why his speech was the stuff of award-winning actor dreams: Charming, smooth, funny, and heartwarming:

"Thank you. This is incredible, really incredible. Thank you to the academy for this honor of honors. They told me I only have 45 seconds up here, which is 45 seconds more than the Senate gave John Bolton this week. I’m thinking maybe Quentin does a movie about it, and in the end, the adults do the right thing."

Pitt went on to give props to Quentin Tarantino, Leonardo DiCaprio ("I'll ride your coattails any day, man"), the cast and crew, he went on to get even more charming... and really heartwarming:

“Listen, I’m a bit gobsmacked. I’m not, I’m not one to look back, but this has made me do so and I think of my folks taking me to the drive-in to see ‘Butch and Sundance’ and loading up my car and moving out here and Geena and Ridley giving me my first shot, to all the wonderful people I’ve met along the way to stand here now."

“Once upon a time in Hollywood... ain’t that the truth. This is for my kids, who color everything I do. I adore you.”

It's safe to say that it just doesn't get better than Brad Pitt blowing his kids a kiss at the Academy Awards... after just having won his first Oscar for some of the most amazing acting of his career.