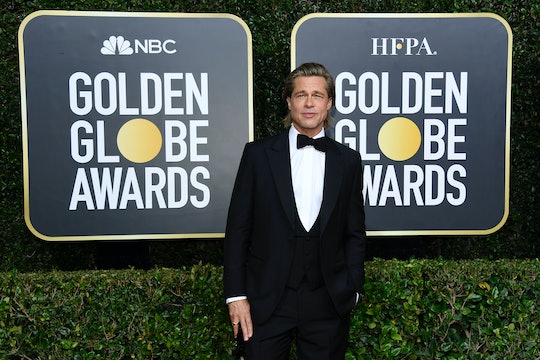 Brad Pitt Didn't Bring His Mom To The Golden Globes, & Other Tidbits From His Speech

Being an eligible bachelor in Hollywood must be hard — take it from currently single actor, Brad Pitt. He left his parents in "the Ozarks" and walked the carpet alone at the Golden Globes this year. But Pitt didn't bring his mom to the Golden Globes for a very hilarious reason — he didn't want there to be any rumors about them dating, he joked.

Pitt took home the award for Best Performance by an Actor in a Supporting Role in any Motion Picture at the 2020 Golden Globes for his role in Once Upon A Time In Hollywood. Although some people might have been nervous to be up on the stage accepting such a huge award in front of some of the biggest people in Hollywood, Pitt was calm and collected, thanking his co-star Leonardo DiCaprio (or LDC, in the words of Pitt) for being an "all-star."

But perhaps the most important people that Pitt thanked were his parents, who were at their home for um, some understandable reasons. "I want to say hi to my folks, 'cause, 'Hey!'" Pitt said during the speech. "They're back in the Ozarks."

"I wanted to bring my mom but I couldn't, because any woman I stand next to they say I'm dating. It would just be awkward."

It truly sounds hard to be single (and attractive) in Hollywood.

Pitt is currently single after separating from wife, Angelina Jolie, in September 2016. He almost had a run in with his ex-wife, Jennifer Aniston while on the red carpet this year, but that didn't faze him. He told Entertainment Tonight ahead of the Golden Globes that she is "a good friend" of his.

But who needs a date to the Golden Globes, especially when you're Brad Pitt? He was the epitome of cool up on the stage accepting his second Golden Globe award since 1996. He even made a cute Titanic joke at DiCaprio — "I would've made room on the raft" — and ended his speech by imploring listeners to be kind to someone. Good advice for all. Especially about the raft.