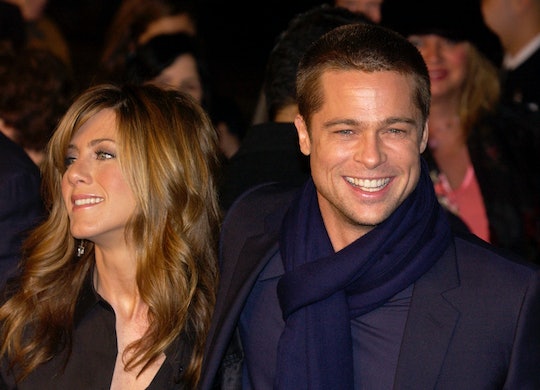 They are never, ever, ever getting back together. Speculation has been rife about a potential reunion between Hollywood exes Jennifer Aniston and Brad Pitt since the Dumplin' star announced that her marriage to Justin Theroux was over. It appears, however, that these two aren't giving love another shot. Indeed, Brad Pitt's response to rumors he's back with Jennifer Aniston will hopefully put to rest any further speculation.

The 55-year-old actor was making his way to his car in Los Angeles late last week when he was approached by paparazzi with questions about his relationship with Aniston, according to Entertainment Tonight. Pitt was asked if he was back with the actress, which the prying photographer noted "everyone wants to know." Pitt chuckled at the question, and while he didn't give a definitive yes or no, it seems pretty clear how he feels about the question. "Oh my god," he said with a laugh, as Entertainment Tonight reported.

Rumors about a Pitt and Aniston reunion often swirl, but speculation intensified in February, when he showed up at his ex-wife's 50th birthday party, according to People. Aniston wasn't his only ex at the party, nor was Pitt hers. According to People, Gwyneth Paltrow, whom Pitt dated for a time, and John Mayer who once had a relationship with Aniston, were also in attendance.

Aniston has been open about her love life in the wake of her divorce from Theroux. The Friends actress recently revealed to Harper's Bazaar that she has little time for love these days, but would welcome it if it came along. She isn't actively seeking it out, however. "Am I on OkCupid? No. I have zero time, to be honest," Aniston told Harper's Bazaar, adding later in the interview, "I feel like whatever [romance] looks like, it will present itself, and it's not about seeking it out, you know?"

She also laughed off rumors about herself and Pitt getting back together months earlier, in an interview with InStyle. Interviewer Molly McEarney — Jimmy Kimmel's wife — jokingly asked, "When are you getting back together with Brad?" The question left Aniston in "hysterics," she said. Like Pitt, she didn't provide a definitive yes or no, but her feelings on the matter seem pretty clear. "You're the only person who could start an interview like that an actually send me into hysterics and not hives," she said.

Pitt and Aniston were married in July 2000, after dating for about two years, according to Marie Claire. They announced their decision to split in January 2005 in a joint statement in which they claimed was not driven by "any of the speculation reported by the tabloid media." The couple said at the time that they planned to "remain committed and caring friends," and it appears that's what they've done.

It seems unlikely that fans will ever see Aniston and Pitt together again. The couple ended their relationship more than a decade ago, and hasn't looked back. That doesn't mean you have to stop secretly shipping them though.