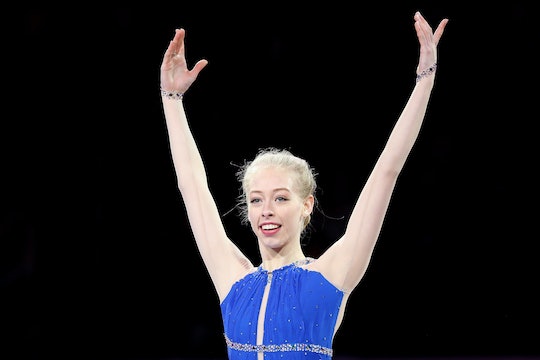 It's always incredible to me how young so many Olympic athletes are. Bradie Tennell, for example, is a top contender for the gold medal in figure skating at just 19 years old. She may be an accomplished Olympic athlete, but she's still a teenager. And if there's one thing that teens know, it's social media. And Bradie Tennell's Instagram proves this Winter Olympics figure skater knows that sometimes dreams really do come true. Figure skating is my favorite event to watch at the Winter Olympics, so I've been checking out all of Team USA's figure skater Instagram pages to find out as much as I can about them.

Tennell won the USA national championships this year with her program skated to music from the 2015 live-action Cinderella movie, and wore a sparkly blue costume to match. This is one of those times when calling it a Cinderella story is almost too apt. Tennell had never made it to the championships before, and she won the whole dang thing, guaranteeing her spot on the Olympic team. While just a few months ago nobody knew her name, now she's representing the U.S. at the Olympics in PyeongChang in 2018. And taking a look at her social media, it's clear that she's just as modest as her sudden rise to fame would suggest.

In November, the relative Instagram newbie posted "So excited to be making my Grand Prix debut!" She probably didn't know then that this event would kickstart her journey to freaking South Korea in a few months' time. The Grand Prix is a prestigious international figure skating competition, widely seen as a stepping stone for the Olympics. It's highly unusual for a first time Grand Prix competitor to earn a medal, but in the end Tennell was the only U.S. woman to make it to the podium. Go figure. (I'll stop with the puns soon, I promise).

Clearly, Tennell's skating career is the most important thing in her life right now. It takes incredible dedication and study to become an athlete at this level. And naturally her Instagram account reflects that, with lots of pictures of herself on the ice. She also posted an adorable snapshot of herself as a tiny girl dressed in a Cinderella costume. Clearly the Cinderella love started early for this champion skater. How cute is this, honestly?

Apparently even when Tennell is having down time she still loves to hang out on the ice rink. She also posted a picture of herself skating at the ice rink in Millennium Park in Chicago in front of that city's own enormous Christmas tree. I can only imagine how embarrassed the other skaters felt about their own skills next to her. There's always that one person, right?

But obviously it would be impossible, not to mention extremely cold, for one woman to spend all of her time on the ice rink. Tennell has also posted some (relatively) normal 19-year-old person things. This includes posing in front of the Liberty Bell in Philadelphia, and celebrating Memorial Day, and visiting enjoying the beauty of Italy during her trip there. Of course, none of this appears to have been simply for vacation.

Tennell noted in her captions that these trips were all actually for competitions. But hey, at least her skating got to take her to Italy — not everybody gets a chance like that.

Basically, what I've learned from Tennell's Instagram page is that she is extremely dedicated to her sport, and may just walk away from PyeongChang with a gold medal or two.