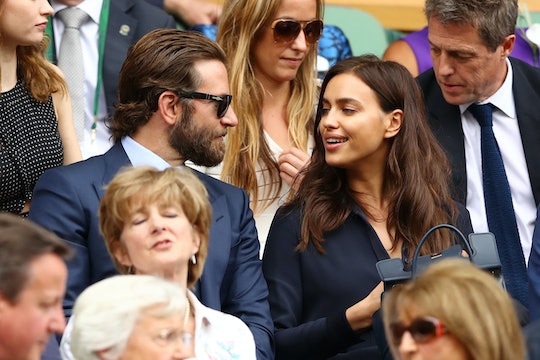 Major congratulations are in order for Bradley Cooper and Irina Shayk! A source revealed to People this week that Shayk gave birth two weeks ago. It's baby no. 1 for Cooper and Shayk, but they're keeping things quiet so far. The pair are notoriously private and haven't yet released a statement about their bundle of joy. No other details about the new addition to Cooper and Shayk's family have been released, either. We don't need to know the baby's name, though, to be excited for this growing family.

Romper has reached out Cooper's rep for confirmation of the birth and is awaiting a response.

This is the first child for both Cooper and Shayk, who have been together since Spring 2015. News that the 31-year-old Russian model was expecting broke after she walked in the 2016 Victoria’s Secret Fashion Show. Since then, both Cooper and Shayk have kept a pretty low profile. Shayk was spotted by paparazzi out and about in Disneyland back in February, though, with her growing baby bump on display. She posted pictures from the day on her Instagram account, but unsurprisingly, kept her pregnancy out of view. Cooper wasn't present at the Disneyland outing, however, the 42-year-old actor has been spotted around Los Angeles with his expectant girlfriend in recent months.

Even though the new parents haven't been discussing this journey publicly, they've definitely been celebrating privately. According to E! News, the couple hosted a beautiful baby shower back in March. They were surrounded by friends and family, including Cooper's mother Gloria Campano. Shayk has reportedly grown closer to both her partner and his mom during her pregnancy, so it must have been great to have them both there supporting her at the shower. "Bradley was hanging with his mother, making sure everything went smoothly," E! reported a source as saying, noting the dad-to-be was "very chill and relaxed."

The source told the news outlet that Cooper and Shayk knew the sex of their baby before throwing their baby shower and had the decorations at the party reflect whether they were expecting a boy or a girl. The guests at the party remained pretty tight lipped about this information, though, because the baby's gender is still unknown. Much like the couple themselves, the event seemed to be pretty low key as well, with some simple finger foods reportedly being served throughout. The source revealed that Shayk felt the shower was "more perfect than she could've imagined."

There's nothing more exciting than bringing a tiny baby into the world. Congratulations to the new parents!