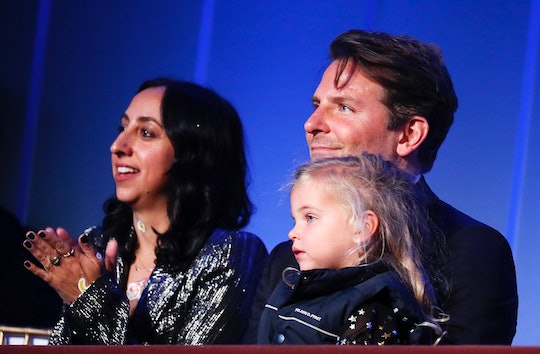 Some celebrities go to great lengths in order to protect their children's private lives. And I totally get it. Just because mom and/or dad happens to be famous doesn't mean their children should have to live their lives in the spotlight. Which is why it's such a big deal when otherwise private celebs finally do show up for an event with their child in tow. Like when Bradley Cooper's daughter Lea made her first public appearance at a recent event. And, guys, she's as adorable as you expected.

As a refresher, Cooper and his ex Irina Shayk share a 2-year-old daughter, Lea De Seine Shayk Cooper. The pair announced their split in June, according to People, following a 4-year relationship, and now have shared custody of their little girl. Lea has been photographed out and about with her parents before. Up until this past weekend, however, Cooper and Shayk's daughter hadn't attended any public events with her famous father.

On Sunday, Oct. 27, Cooper arrived at the Kennedy Center for the Performing Arts in Washington, D.C., with a seriously adorable date: Lea. The multi-talented actor/director/producer was there to see Dave Chappelle be awarded the 22nd Annual Mark Twain Prize for American Humor, according to Entertainment Tonight. A series of photos from the event show Cooper holding his daughter while wearing a black suit. Lea, meanwhile, was wearing a black printed dress with a vest and looking chill as can be — just hanging out with dad.

Since becoming a father in March 2017, Cooper has made it a point to keep this part of his life relatively private. Ellen DeGeneres managed coax a little bit from Cooper about fatherhood has changed him in April 2019. "I think like every way," he told DeGeneres at the time. "It allowed me to embrace my childlike self without any sort of fear or judgement. You know what I mean? I could just play with toys all day long and not feel like, 'Is this weird?' You know, or watch cartoons endlessly and not feel like I'm wasting my life."

In a September 2018 interview with NPR, Cooper had previously opened up a little more about Lea's influence. “Well, I’ve been opened up to a world of children’s music, that’s for sure,” he joked. “I spent about 15 years going from movie to movie to movie. And then I hit 39 and I stopped and I said, 'What do I really want to do?'"

After taking a break from movies, Cooper starred in the Broadway production of The Elephant Man. A year later, he spent four years working on A Star is Born. "The one thing that I know in the future is: It’s worth all the time to dedicate, even if one piece of art comes out of it in a half a decade, that would still be incredible as long as I can feel like it’s the movie I wanted to make, which is this movie," Cooper told NPR. "So I guess having a child, and having a family of my own — which is a miracle and something I’ve always dreamt of — has opened me up even more, I guess, to the day, and to be present."

Although Bradley Cooper isn't one to always gush about fatherhood, or to provide many details about his daughter, you can just tell he's an awesome dad. And you know what? Kudos to him for bringing a 2-year-old to a black-tie event — during which he was aware cameras were on them at all times. (Thankfully, Lea handled it like a champ!) I'm not sure I could be so brave!