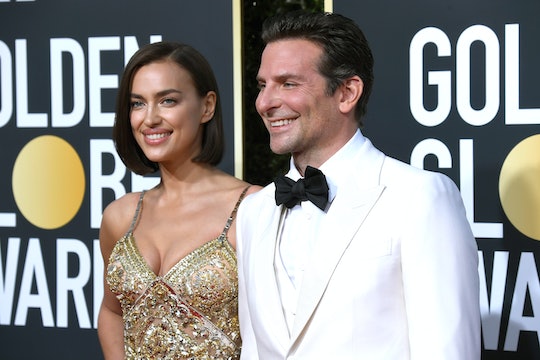 Not only is Bradley Cooper an incredible actor, but he also wrote, directed, produced, and starred in the Academy Award nominated film, A Star Is Born, all while being a dad to a 21-month-old daughter, Lea De Seine. But he's not doing it alone; he has the help of his girlfriend and mother of his daughter, Irina Shayk. Although they don't often share insight into their lives as parents, Irina Shayk did recently open up about motherhood in a new interview in which she calls her role as a mom "one of the greatest things in the world."

Shayk gave birth to their daughter on March 21, 2017, according to People, after she and Cooper had been dating since 2015. But in the years since then, Shayk has kept that part of her life private, which is definitely understandable. But, this hasn't stopped people from wondering about her life as a mother. And in a new interview with W, Shayk is opening up more about that huge part of her life with Cooper.

The 33-year-old model told the magazine earlier this week that being a mom hasn't transformed her life entirely, but instead has changed it significantly for the better.

"I always say that being a mom is one of the greatest things in the world," she told the magazine.

She added, "I don't think it's changed my life. It did change in a way to make me better. Family is the most important thing in the world."

And the model is definitely not changing or limiting her style because she's a mom (no mom jeans or stereotypical mom styles here). And, as she told the magazine, she thinks it's pretty unfair for others to judge moms based on their style. As Shayk told W:

Sometimes [people] will be like, "Oh, she's a mom and she's wearing this?" I'm like, "Give me a break, girl." Again, we live in the 21st century. Just because you are a mom and you have a baby doesn't mean you have to change and dress different. Keep expressing yourself and who you are.

As for Cooper? He's just as enamored with parenthood as Shayk is. In an interview with NPR last year, for instance, Cooper revealed that having a daughter has taught him to live in the moment. "I guess having a child, and having a family of my own — which is a miracle and something I've always dreamt of — has opened me up, even more, I guess, to the day, and to be present," Cooper told NPR.

Because Shayk and Cooper are so focused on their daughter, they tend to not share many details about her in interviews. Shayk does not post pictures of her daughter (or many private photos with Cooper, for that matter) on Instagram, and they rarely reveal any personal details about Lea with the press, according to Us Weekly. Instead, they choose to talk about parenting as a whole rather than talking about Lea's personality or interests. "I just don't talk about certain things," Cooper has said of his personal life, according to E! News.

But, when they do give these little peeks into their lives as parents with their baby girl, it's always lovely to hear.