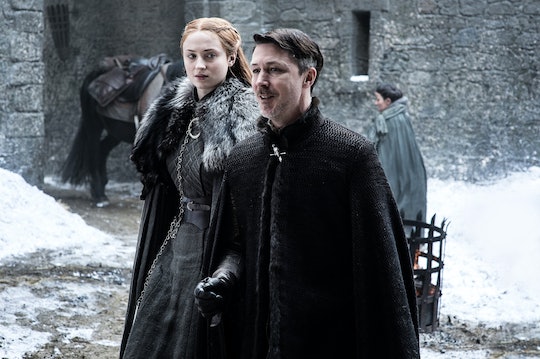 Bran & Sansa Reunite On ‘Game Of Thrones’ & People Are Freaking Out

During Season 6 of Game of Thrones, fans lost it when Jon and Sansa were finally reunited. It was the first Stark reunion since they all left Winterfell. As Game Of Thrones comes to a close, fans were expecting another Stark reunion in the near future, and they were right. In the latest episode, Bran and Sansa reunited and naturally, people are freaking out.

These two Starks haven't seen each other since Season 1 and they've both changed a lot since then. While Sansa was forced to face terrible horrors at King's Landing, Bran faced his own terrors north of the wall. Sansa has been through two marriages, neither of which she wanted. Now Sansa is Queen of the North (for now) and she's learned how to play the Game of Thrones fairly well.

Meanwhile, Bran has honed his warging abilities and has become the new three-eyed raven. He's learned a lot with his abilities — most importantly, he knows the truth about Jon's parentage. But will his older sister actually believe his story? It's hard to say. For now, fans are just happy these two are back together.

Though Sansa was more than excited to see her brother again, Bran's excitement was a bit lacking. However, can you really blame him after all he's seen? Still, the two attempted to have a chat and Sansa said what everyone was thinking.

Bran, of course, felt the same way, but probably not for the same reasons. There's a lot that Bran needs to tell Jon. Not only that he's both a Stark and a Targaryen, but also what to expect from the Night King's army. Also, it may be helpful for Bran to tell Jon about how the White Walkers were made in the first place and possibly about meeting up with Uncle Benjen. At least this time when someone tells Jon his Uncle Benjen is alive, he won't be stabbed to death.

Bran also revealed that he's now the three-eyed raven. Of course, Sansa had no idea what that meant. There was a lot Sansa didn't understand, and to be honest, it's easy to see why. Bran is living in the more fantastical part of Westeros, while all Sansa knows is the politics. It'll probably take some time for Sansa to fully understand who Bran is now. Unfortunately, they probably won't have much time.