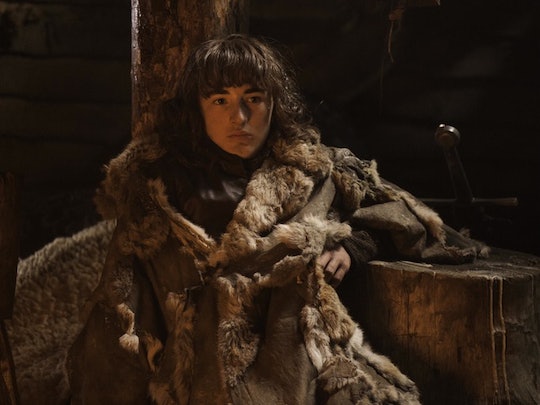 Season 6 of Game of Thrones doesn't premiere until April 2016, but Entertainment Weekly has given us our first look at Bran Stark in a very long time, and you won't believe how different he looks now! Actor Isaac Hempstead-Wright was absent from Season 5 entirely (did you miss him?), so we haven't seen him since the Season 4 finale, when he met the Three-Eyed Raven, aka Bran's Yoda/Dumbledore/Gandalf. The wizard tells Bran that although the boy will never walk again, he can teach him to fly. So does that mean he won't need Hodor to act as a human mobility aid anymore? More importantly, will that free up Kristian Nairn for more DJ gigs?

Game of Thrones' Season 5 finale left us with plenty of questions about the other Stark and Stark-adjacent kids. Namely, is Arya really blind? Like, for good? How did Sansa and Theon survive that jump? How is it possible that Jon Snow isn't dead? But we're also still wondering about the second-youngest Stark, Bran, who's apparently been holed up in a cave learning how to do magic for the last couple years (nobody cares about Rickon).

It seems that Hempstead-Wright did a lot of growing up while he was off-screen; EW reports that he's now almost six feet tall. Couple puberty with a new haircut, and the dude is almost unrecognizable. If you're one of those people (like me) who still can't get over how weird it is to see Luke's guns nearly bursting out of his sleeves on Modern Family, you're going to want to sit down for this:

Looks like Bran's traded in his old ride (Hodor) for a horse. And now I have more questions. Like, why does he need a horse when he can fly? Can he not fly yet? Can he take over the horse's mind and possess it, like he did with Hodor? Who cut his hair? Where did he get the sweet new threads? What has he been eating in that cave, because I don't think they have Pizza Rolls beyond the wall? What's up with all those other people he was with? Never mind, nobody cares about Rickon.