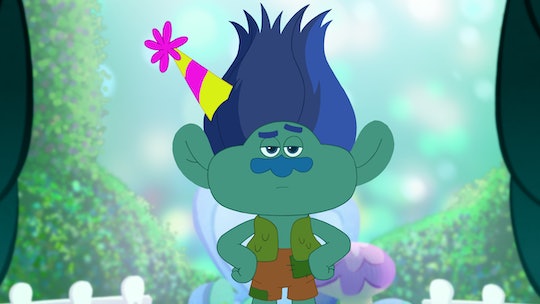 Dreamworks is having a banner year on Netflix, from the She-Ra and the Princesses of Power reboot to Guillermo del Toro's Trollhunters: Tales of Arcadia. Trolls: The Beat Goes On, also from the animation studio, is set to premiere on Netflix later this month and this exclusive Trolls Season 5 clip gives an adorable glimpse of what kids can expect this season. In it, troll survivalist Branch stumbles upon a sack of eggs in the forest, which — surprise! — hatch into three adorable chicks. The baby birds go into a brief hypnotic state as they imprint, the process by which young animals come to recognize someone as a parent, on poor Branch.

Needless to say, he's less than excited about the prospect of three baby birds becoming hyper-bonded cling monsters and following him around everywhere he goes. But Poppy swiftly explains that all he has to do to free himself is teach them the basics of bird life until they're self-sufficient enough to leave the nest, so to speak. So Branch embarks on a very serious training regimen, up to and including eating his fair share of worms — and not the candy kind. But eventually, his little flock starts to pick up on how to eat, catch worms for themselves, burrow holes into trees for shelter, and even fly. By the end, Branch finds himself completely attached to them and swells with pride watching his three baby birds succeed. Dare I say he's even a little sad to see them go?

Trolls: The Beat Goes On first premiered on Netflix at the beginning of last year and the animated series based on the feature film Trolls has already cranked out five seasons. "Picking up where the film left off, the Netflix original series is an all-new chapter in the the endlessly upbeat adventures of the Trolls as Poppy, Branch, and all of Troll Village keep the party going in their fantastical forest home," the show's synopsis states.

Like the film, Trolls: The Beat Goes On also features original songs, this time from songwriter and producer Alana Da Fonseca. Da Fonseca was also the executive music producer on Pitch Perfect 3. The Fosters and This Is Us alum Amanda Leighton replaces Anna Kendrick as the voice of Poppy in the animated series, and Pitch Perfect 1 and 2's Skylar Astin takes over the voice of Branch for Justin Timberlake.

Season 5 is expected to span six or seven episodes, like the previous seasons, with two 11-minute segments airing as part of each 22-minute episode. The promotional poster teased that 52 segments had been written, which have all aired as part of the first four seasons. No word yet on how many seasons Dreamworks plans to produce after this one. Season 5 of Trolls: The Beat Goes On drops on Netflix Friday, Jan. 18.