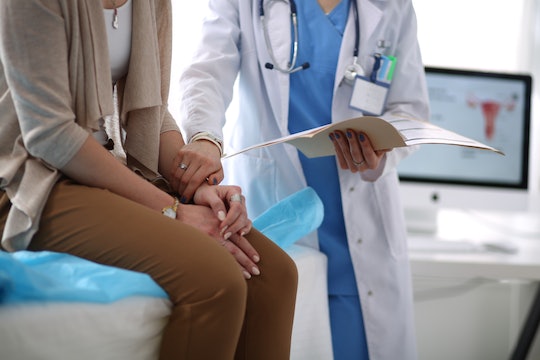 Breast cancer can affect women from every walk of life, but past research found that, in general, women who have had kids were less likely to develop breast cancer. Now, though, new research has found that breast cancer protection after pregnancy may not start until decades later. In fact, there may be an increase of breast cancer risk immediately after childbirth.

The problem with that, however, is it means that breast cancer in younger women is difficult to study, as outlined by the National Institute of Environmental Health Sciences, and most of what researchers know about breast cancer and associated risk factors come from studies of older women.

Published in the Annals of Internal Medicine, researchers combined data from 15 studies to look at the relationship between childbirth and breast cancer in women under 56, as noted by the study's abstract. According to EurekAlert!, the study was conducted by scientists at the National Institutes of Health, along with members of the international Premenopausal Breast Cancer Collaborative Group.

Researchers found that breast cancer protection after pregnancy may take as many as 30 years to kick in from the birth of a woman's last child, according to EurekAlert!.

The study's abstract went on to note that they actually found an increased risk for breast cancer for more than 20 years after childbirth. "Health care providers should consider recent childbirth a risk factor for breast cancer in young women," the researchers wrote.

"We were surprised to find that an increase in breast cancer risk lasted for an average of 24 years before childbirth became protective," Dale Sandler, the study's senior author, said of the findings, according to the NIH. "Before this study, most researchers believed that any increase in risk lasted less than 10 years.”

In addition, the researchers found that the association seemed especially strong for women who were older when they first gave birth, had more births, or had a family history of breast cancer, as noted by the study's abstract.

The study also tackled another popular public belief. Generally, many people believe that breastfeeding reduces breast cancer risk. According to the NIH, the researchers found that breastfeeding didn't appear to have any protective effect.

All of this new research may seem unsettling, but it helps doctors to really understand how to better protect women of all ages. General information may focus on women after menopause, but now this study has identified childbirth as a risk factor, which could potentially help doctors and others care for younger women as well.

"This difference is important because it suggests that we may need to develop tools for predicting breast cancer risk that are specific to young women," first author Dr. Hazel Nichols, Ph.D. said, according to EurekAlert!, "Doing so would help women talk to their health care providers about when they should start mammography screening."

Hopefully, this study means that doctors will start to change how they assess breast cancer risks, so more people will be protected.