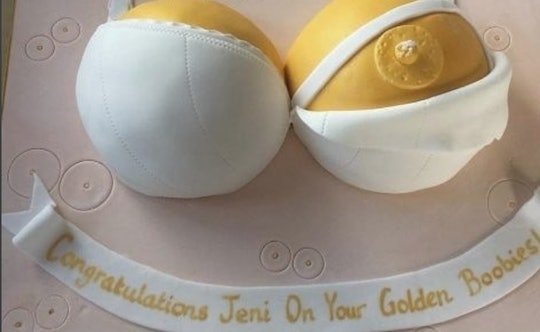 Breastfeeding Awards Are Totally A Thing, So Here's How To Win Golden Boobies

Anyone who has even attempted to breastfeed will tell you: Feeding a small human with your body is a huge commitment that takes a lot of time and effort. Not only are they tasked with nourishing their little one, but for those who exclusively breastfeed, mom is literally the only person who can feed their babies. That's an enormous amount of responsibility. Because young babies often feed on-demand, around the clock, that's a ton of time out of each day. And don't even get us started on supply issues, cracked nipples, clogged ducts, and mastitis. So yeah. Feeding a child with your body is no easy feat — and meeting certain milestones is definitely a big deal. In fact, breastfeeding awards are totally a thing — and moms seem to have mixed feelings.

As Parents reported, breastfeeding awards are an unofficial, just-for-fun way to celebrate moms making it to certain milestones when it comes to feeding their children breast milk. It works in a sort of tier-type way — and although the different levels/names vary within the breastfeeding community itself, here's a general feel for the system: Three months of breastfeeding is considered "bronze boobs"; six months is "silver boobs"; one year is "golden boobs"; 18 months is "platinum boobs"; and two years is "diamond boobs." However, as you can see from the chart below, awards can be even more detailed than this.

So how did all of this "golden boobs" business start, anyway? Apparently, the trend began years ago in online forums as a detail in members' signatures, according to Parents. Example: In a BabyCenter Community thread dating back 2011, one confused mom was trying to figure it all out and asked fellow community members what the heck was what with all these "golden/platinum/diamond boobies" she was seeing. One person replied, "Apparently it's how long you nursed. Some people combine how long they've nursed and there are also different charts for which color equals which milestone. The generally accepted ones are bronze/4 months, silver/6 months, gold/1 year...there are varying charts I've seen on what is considered diamond/platinum."

Through the years, this celebration of breastfeeding milestones has spilled over into real life. This is evident by items currently available on Etsy — and by some pretty creative cakes moms have shared on social media. In 2017, for example, one mom shared a photo of a cake that marked one year of breastfeeding. The cake is in the shape of a woman's torso, which features a golden bra and who of the breasts exposed. A necklace reads, "Golden Boobies" and balloons running down the women's unbuttoned shirt read, "Celebrate." The tweet was captioned, "Golden boobies and 1st Birthday cake. Celebrating breast feeding in the best way."

More recently, another cake — created by Grace Daniels Cakes in Galway, Ireland — celebrated a mom's one-year breastfeeding milestone. "Congratulations Jeni on Your Golden Boobies!" was written on the cake, along with a pari of golden breasts.

Etsy sellers are even cashing in on the trend with keychains ...

Although there are a number of proven benefits to breastfeeding, only about 13 percent of children in the U.S. are breastfed for six months, according to Psychology Today. The American Academy of Pediatrics, meanwhile, recommends 6 months of exclusive breastfeeding, followed by gradually introducing solid foods and breastfeeding until at least age 1. Obviously, these recommendations aren't being met by the majority of children — whether parents choose to formula-feed from day one, decide it's not for them after a few months, or run into physical/logistical barriers that make continuing breastfeeding impossible. Each situation is different, and the topic of breastfeeding can definitely be a touchy one. (So it's understanding if these breastfeeding "awards" might inadvertently rub formula-feeding parents the wrong way.)

However, for moms who do manage to beat the odds and breastfeed their babies for six months, one year, or beyond, it can be encouraging to acknowledge these milestones. And who knows? Perhaps these charts can motivate more moms to continue breastfeeding — so they, too, can reach the "golden boobies" status. In all, I'd say the potential benefits of "breastfeeding awards" far outweigh the potential of them causing competition between moms. Because if more babies are breastfeeding within the recommended window of time, then everyone wins.

More Like This
What Is RSV?
The Best Halloween Family Pajamas To Match Your Boos
Can You Mix Breast Milk & Formula? Experts Weigh In
Here’s Your Guide To Paced Bottle Feeding