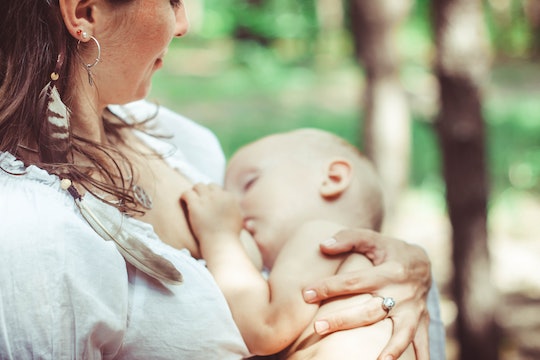 Breastfeeding Could Protect Babies From Getting This Skin Condition Later In Life, Study Says

In the grand scheme of things, something as minor as itchy skin may not seem like much. But parents of babies and young children with eczema can tell you that it's not a pleasant condition to deal with. Fortunately, though, it may be at least somewhat preventable. As a recent study has found, breastfeeding could actually help protect babies from this painful skin condition.

There are a number of benefits to breastfeeding, not least of which is better skin. For this reason, the World Health Organization (WHO) recommends that babies be exclusively breastfed for the first six months to prevent allergies and infection, and provide necessary vitamins and nutrients. While breastfeeding does have a number of benefits, many moms are unable or choose not to do so for an array of reasons. But one leading reason why many moms don't reach their breastfeeding goals, research has found, is lack of support, according to TIME. In an effort to persuade more women to do so, researchers at King’s College London aimed to highlight the benefits of breast milk.

The PROBIT study published in JAMA Pediatrics — which included 17,000 moms and their babies beginning in 1990 and lasted for over a decade — was conducted in the United Kingdom, a region of the world which has one of the lowest breastfeeding rates in the world, according to the The Sun, coming in at just one percent of babies being fed solely breast milk for the first six months.

According to the findings, researchers found that children of mothers who received breastfeeding support were 54 percent less likely to experience eczema as teenagers. It is not clear from the study's results if the subjects experienced eczema as babies.

Carsten Flohr, co-author of the study told The Guardian that these benefits did not seem to extend past three months of breastfeeding, explaining:

It seems that we can say from the trial that clearly promoting exclusively breastfeeding is beneficial, but there doesn’t seem to be an additional benefit of doing that beyond the first three months of life with regard to the protective effect on eczema in adolescence.

Fortunately for those who do have eczema, also known as atopic dermatitis, it is treatable with a healthy lifestyle and a number of topical solutions. But the condition is made more troublesome when babies are the ones with it. Parents of babies with eczema must deal with their little one's pain and itchiness, from potentially unknown causes, and intense flair-ups. Anything from chemicals in inorganic clothing materials and shoes to plastic diapers can become an instant nightmare for eczema prone infants and their parents. Determining the individual causes for your child is the first step towards soothing their skin.

Parenting reports that along with hereditary predisposition and contact with chemicals, mothers' diets may also play a role in baby eczema. Allergens that the mother consumes that are then passed on via breast milk could lead to flair ups. Keeping a food diary until trigger foods are determined is a good way to pinpoint cause.

Further tying together the link between eczema and breast milk's protection from it, a study published by BMC Dermatology found that topically applied breast milk helped to treat atopic eczema in children. While it was a very small study, the results are encouraging for parents looking for an affordable way to treat the common condition. Roughly 20 percent of babies and young children have eczema, according to Baby Center, making it a condition that impacts many families around the world.

Considering how common eczema is in young children, and the suffering associated with it, any information on how parents can prevent and treat it is likely to be welcomed. While breastfeeding is not an option for every mom, its benefits cannot be ignored.