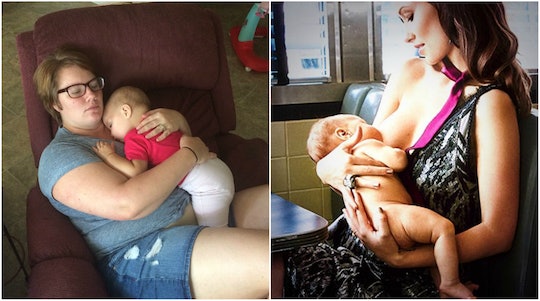 Let's Be Real, Breastfeeding In Public Is Way Harder When You're Fat

I've always had big boobs. Breastfeeding made them both bigger and saggier at the same time. I mean, there's never been a more appropriate time — if I can get away with saying this — for them to be called "jugs" than when breastfeeding with bigger breasts. Nursing my daughter changed me in lots of ways, but one of the things it made me realize was how much more space my body and my breasts took up — it has shown me that when it comes to breastfeeding with big boobs, it's harder if you're not skinny.

Fat women like myself often have to fight for our place and our right to take up the space we inhabit regardless of being a nursing mother, and it's an unfortunate concept (that needs to disappear) that breastfeeding while maneuvering a large amount of breast (or other fat) tissue makes it that much harder to not be judged.

At least, I remember feeling like it would be so much easier if I didn't have quite as much flesh hanging out every time I needed to feed my kid. The truth is being plus-sized means most areas of my body are bigger than many of the women around me. My belly, arms, boobs were all parts of my body that a lot of society has been trained to see as undesirable or needing to be lessened. So even before I was a mom, wearing a tank top or a strapless dress was always something that I was going to have to negotiate with because of how much (extra) skin I was willing to show.

Breastfeeding brought up this same dilemma all over again. Unfortunately, it's not as easy as just throwing over a cover or a blanket. For one, having an abundance of boob meant I'd usually have to use one arm to hold my daughter and the other to cup my breast for her to latch on well. Gravity likes to pull those (literal) suckers down, so I'd have to hold up my breast throughout her feeding. Secondly, that meant the cover I'd just thrown on would likely be tugged off by my baby's roaming little hands — a baby who hated being covered up, by the way. I don't blame her. I don't eat with a sheet over my head either. I quickly gave up the effort to keep using a nursing cover.

But the exposure this would often cause — especially if I was lifting my shirt entirely, since that was much easier than trying to pry my large boob out of a small part or the top of my blouse — was the main reason I didn't breastfeed in public like I wanted to. I definitely struggled with a fear of being considered inappropriate, because having "big boobs" is often problematically synonymous with being overtly sexual.

Now, anyone who considers boobs that are engaged in their natural purpose of breastfeeding as "indecent" is a jerk in my opinion. But as much as I'd like that mindset to be different and to be able to say that I didn't give a shit about what people thought, I have to admit that I did care what others thought of me. It was an issue in almost every way when I first became a mother — the idea that every decision I made may or may not make other people feel uncomfortable.

Recently, a mom was asked to leave a Chick-fil-A because she was breastfeeding uncovered. Would that mom have been asked to leave if she were a skinny woman and not covered up? There's no way of really knowing, but I have a hunch that had she been a thin mother, there would have been less to see in the mind of that manager — and less to complain about.

A couple of months ago, a mother was judged for feeding her baby at Disneyland. The problem was not that she was breastfeeding per se, but the "exposed breasts." Essentially, she crossed that invisible line into "too much boob" territory.

What is the difference between the above atrocity and the supposed "beauty" of Olivia Wilde's breastfeeding shoot? I think we all know.

For my part, all these photos are beautiful. It doesn't matter if you're skinny or fat, we already know a mother should never be asked to leave an establishment because she's breastfeeding. But do we give fat (and proud and confident, I might add) mothers the grace they deserve when putting it all out there? The truth is we aren't exposing ourselves for anyone else other than our babies anyway. Next time around, if I get the privilege of breastfeeding a second child, I promise not to care anymore. My body is amazing, and it deserves to do what it's supposed to no matter how big it is.

More Like This
What Parents Need To Know About Sleep Training & Breastfeeding
Why Does My Baby Cough While Breastfeeding? Experts Explain
When Does A Baby Recognize Their Father? A Pediatrician Explains
Is It Safe To Pump While Pregnant? Experts Weigh In
What Parents Are Talking About — Delivered Straight To Your Inbox