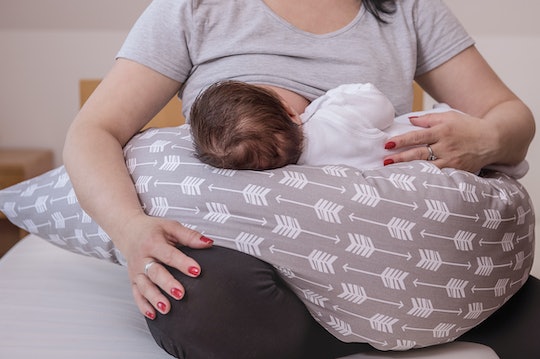 The potential benefits of breast milk aren't exactly a secret. When it comes to babies' risk for obesity, however, it seems that those benefits are amplified when a baby has breast milk "straight from the tap" — meaning feeding a baby pumped breast milk via a bottle doesn't offer the same level of "protection." That's because breastfeeding is linked to lower obesity rates than pumping, according to this new study.

The study — which was published in the September edition of the journal Pediatrics — looked at data from 2,553 pairs of moms and babies. It included moms who fed their babies in different ways, from exclusive breastfeeding to nursing for three months and then switching to formula, to bottle-feeding and more. What the study found was babies who nursed directly from the breast had lower body mass indexes at 3 months of age, according to People.

Furthermore, Babies who breastfed for less than six months, on the other hand, ended up gaining weight faster, having higher BMIs at 1 year, and were three times more likely to be overweight compared to babies who were only breastfed, People reported. Additionally, infants who received formula supplementation at six months had higher BMIs than infants who were breastfed and began solid foods, per the American Academy of Pediatrics' recommendations. What's concerning about these finding is that an elevated BMI early on in life can potentially set up an infant for childhood and adolescent obesity down the road.

What researchers weren't able to determine was exactly why there was a difference in obesity risk between babies who nursed directly and exclusively from the breast and those who received breast milk in other ways. They did, however, speculate about why this might be so. "In most studies, researchers typically do not distinguish between direct breastfeeding (at the breast) and consumption of expressed breast milk (from a bottle) or between supplementation with formula versus other complementary foods, and few account for early feeding exposures in hospital," the study's authors wrote. "These are important distinctions because expressing and storing breast milk could reduce its bioactivity, feeding from a bottle may discourage self-regulation, and even brief formula supplementation could potentially alter the developing gut microbiota and influence weight gain."

It's worth noting that overall, feeding infants is best. So exclusively-pumping moms, moms who pump while at work, parents who supplement with formula, or formula-feeding parents definitely don't need to freak out about this study. “Moms who pump go through a lot of effort to do that, and I wouldn’t want them to get the impression that it’s not worth it," one of the study's authors, Meghan Azad, told CNN. "But it does raise the question of, if pumped milk is not the same or not as good, why is that? And what should we be doing to support moms better around breastfeeding if that’s what they want to do?”

With the absence of any sort of guaranteed paid family leave in the U.S., though, the Canadian researcher admitted the results were a bit concerning. “Many moms, they have to go back to work after a few weeks, so if they want to continue providing breast milk, they have to do it by pumping,” Azad told CNN.

So far, I've breastfed three babies for at least 15 months each. Because I worked outside of the home when my first two were little, they received pumped breast milk regularly during weekdays — something I was proud to continue doing for as long as I did. (Because pumping while working full-time is no easy feat.) And I know plenty of moms either choose to exclusively pump, or their babies have a difficult time latching on to the nipple so they rely on pumping and bottle-feeding.

As Azad pointed out, breastfeeding is not an all-or-nothing thing. "Any amount is better than none. The more you can do, the better. Every feed counts.” Amen. So keep on keeping on, mamas.

More Like This
10 Ways Breastfeeding Is Good For Moms, Too
Does Pumped Breast Milk Have Antibodies? Experts Weigh In
How To Tell If Your Newborn Is Nursing For Comfort
Why Does My Baby Cough While Breastfeeding? Experts Explain