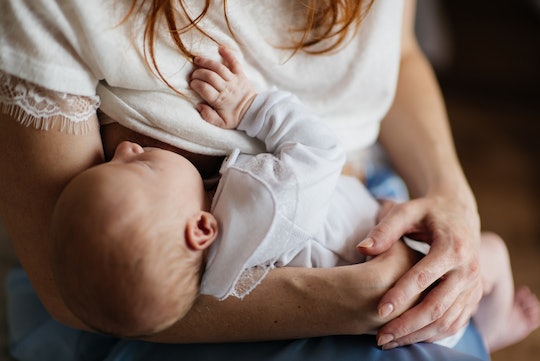 Breastfeeding Might Help Protect Moms From Liver Disease, According To New Study

Breastfeeding can be a miraculous time when mamas and babies begin to bond (or it can be an emotional, trying struggle, but that's another story). And, as that maternal milk flows, it provides infants with many benefits like illness-fighting antibodies and plenty of balanced nutrition. But, what about mom — are there any benefits for her? As a matter of fact, there are. Already, there is a laundry list of possible benefits for nursing moms, but the most recent one is has people talking. Aside from helping mom recover postpartum, what else could breastfeeding do for the body? Consider this. Breastfeeding might help protect moms from liver disease, a new study finds.

Researchers at University of California San Diego School of Medicine and Kaiser Permanente conducted the study, which concluded that mothers who breastfeed for at least six months might be at a lower risk for non-alcoholic fatty liver disease (NAFLD) later in life, according to a press release from UCSD.

"Breastfeeding and its benefits to the child have been widely studied for years," Dr. Veeral Ajmera, MD, hepatologist at UC San Diego Health, said in a university statement. "However, this new analysis contributes to the growing body of evidence showing that breastfeeding a child also offers significant health benefits to the mother — namely, protecting her from developing non-alcoholic fatty liver disease in middle age."

Non-alcoholic fatty liver disease is caused by an excess of fat stored in the liver and it occurs in people who drink little to no alcohol. As the disease progresses, it can cause severe liver inflammation and scaring that can be irreversible, according to the Mayo Clinic.

If a liver is scarred, it cannot function properly, according to Healthline.

Symptom of NAFLD include fatigue, jaundice, pain in the upper right part of the belly, and swelling of the stomach, according to the Mayo Clinic.

When the study concluded, only six percent of participants had developed NAFLD, researchers report in the Journal of Hepatology. But here's where things get really interesting — moms who had breastfed for 6 months or more were 52 percent less likely to get NAFDL than moms who had nursed for a shorter time period.

Breastfeeding already has a number of benefits for women including assisting with the postpartum healing process through the shrinking of the uterus and the release of oxytocin, according to Healthy Children. It's also been known to reduce the risks of diabetes, rheumatoid arthritis, breast and ovarian cancer, and heart diseases, according to The New York Times.

Moms are the definition of selfless, always thinking about the benefits of breastfeeding as related to their babes. But, maybe it's time to start thinking about you and all the ways breastfeeding might affect your body, including the potential protection from liver disease.