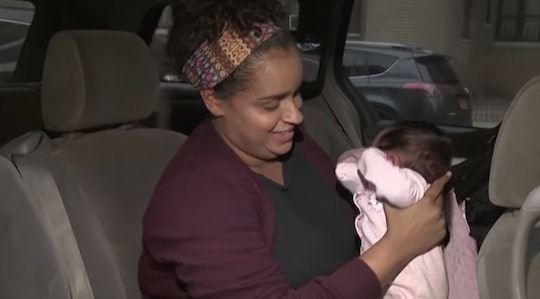 As parents know all too well, when a baby is hungry, they're hungry like, now. I can't tell you how many times I've had to nurse a screaming infant while parked in my vehicle — usually in a legitimate parking lot of some sort. But every once in a while, I've just pulled over as soon as I safely could. (Hey, life happens. Right?) Except, this breastfeeding mom got $115 parking ticket after pulling over to nurse her baby. And now she's speaking out about it.

On Thursday, April 11, New York City mom Guillermina Rodriguez had dropped off her husband for an appointment in Manhattan. That's when she found herself in heavy traffic — and her newborn daughter, Ileana, crying in the backseat because she was hungry. “There was an immense amount of traffic that took me like 45 minutes to an hour to just get from 42nd to 30th Street,” Rodriguez told CBS New York.

Finally, she found where she could pull over to feed her hungry 3-week-old. "I’m like almost crying because she’s crying and all I wanna do is pull over so I can attend to her," Rodriguez, 30, told ABC 7 New York. The mom of four grabbed her newborn and then sat in the backseat to nurse her. "Even though I saw it was a commercial area, I was like, I’m not obstructing the traffic, let me just stay there and I can breastfeed the baby there," she told CBS New York.

Soon after, a NYPD tow truck pulled up and was getting ready to tow her car away — except the parking officer didn't first check to see if anyone was inside, according to ABC 7 New York. Rodriquez quickly made her way into the front seat and honked her horn to let the officer know she was inside the vehicle. Finally, he got out and checked the car.

"I’m actually breastfeeding on one side and pumping on the other, so both my breasts are out, and I’m like, 'I’m breastfeeding the baby!'" Rodriguez explained, according to CBS New York. "And he kind of looks, and he’s like, 'Oh, OK.' He puts the ticket on the windshield and he leaves."

According to People, the NYPD explained the officer isn't allowed to void a ticket after writing it. Still, Rodriguez plans to fight the fine. "Nursing should be urgent enough to exempt a fine," she told CBS, according People. "I think they should have been a little bit more sensitive. I feel like getting them a little more educated on that area will be a lot more helpful."

A statement to Romper from an NYPD spokesperson seems to paint a similar story:

On Thursday, April 11, 2019 at 11:28 a.m. a traffic agent observed a vehicle parked in violation inside of a "No Standing Commercial Meter" zone in front of 408 8th Avenue. He approached the vehicle, which he believed was unoccupied, and printed a summons. Before he could connect the vehicle to the tow truck, a woman in the vehicle addressed the agent and informed him that she and her child were inside of the car. The agent then placed the summons on the windshield of the vehicle and resumed patrol.

As a fellow breastfeeding mom, I truly feel for this poor mama. Ultimately, I hope Rodriguez is able to get the ticket dropped. And hopefully her experience can serve as an example for traffic officers moving forward. Because a hungry baby's gotta eat — "no standing commercial zone" or not.

More Like This
There’s A Reason Your Baby Always Falls Asleep While Breastfeeding
If Breastfeeding Makes You Tired, Here’s How To Keep Your Energy Up
Here’s Your Guide To Paced Bottle Feeding
Kylie Jenner Is Unbothered By A Little Breast Milk Leaking On Her T-Shirt