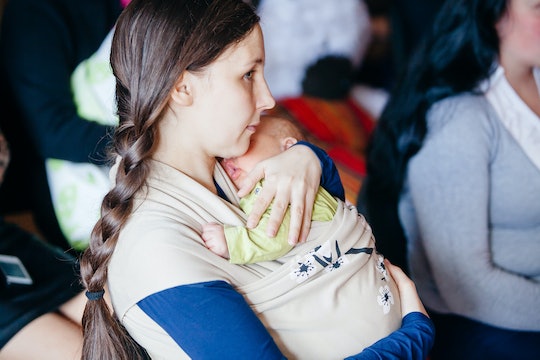 A mom sitting at a TGI Fridays breastfeeding her baby caught the attention of a fellow diner who decided it was totally appropriate to snap a photo and post the picture on Facebook with a message asking why she couldn't at least "cover her boob up." It was a gross invasion of her privacy and any kind of decent taste. But it turns out this breastfeeding mom saw the Facebook post shaming her and decided to respond with one of the smartest and most impassioned defenses of breastfeeding as a feminist issue I've ever read.

I won't rehash her point-by-point take down of this stranger's idiotic behavior, but suffice it to say she gives him a thorough run down on privacy, motherhood, feminism, and decency and it's incredible. If you don't read any other words from this magnificent mama, this is all you really need to know about what she thinks of this yo-yo's criticism of her public breastfeeding:

Know this, I will not tolerate any sort of action like this again. If you post the picture of my child and me ever again I will seek legal action. I will publicly shame you as you have shamed me. I will be supported by a multitude of other moms, dads and advocates of breastfeeding. We will be heard.

But she didn't stop there:

While I in no way, shape, or form owe you any explanation I would like to clarify a few things. I did nothing wrong, I turned away to latch my son and pulled my shirt back up when he was finished out of respect for others in the restaurant. I do not use a cover, because my son fights them, screams, and doesn't eat at all while under them. If he had been screaming because he was hungry then I would be a bad mom for not feeding my hungry child. I did not pump before leaving home, A-because my son does not like to take a bottle and B-because it is my right to feed him any way I see fit wherever I see fit.I wanted to thank you for showing the public your ignorance and for shedding light on a topic that is near and dear to my heart. Through your violation of my and my child's privacy you have done a few things.

First, you've shown your true colors to many and you've exposed others who are likewise simpleminded. While you meant to come across as exposing a violation of your rights and the rights of others, you fell into your own hypocrisy. You violated the rights of not only me, but my child. Did you know it is illegal to share the pictures of minors without the expressed permission of their legal guardian? ...

... Secondly, you have given me a platform and a drive to advocate breastfeeding ferociously. You've inspired me into a call of action. Rest assured, there will be action. Not only by me, the one you violated, but others like me who feel you violated them and their rights. Those that you are degrading by shaming the act of feeding their child. How I pity those who would actually belittle a mother for taking care of her child.

Besides that mic-drop moment, this mom did something really important in her defense of her fellow breastfeeding moms: she took the time to actually educate people who don't know just how tough it is to try and breastfeed a baby in modern America. As an adoptive mom, I've never breastfed, so I never understood either just how tough it was to try to do something as simple as feed your baby. I didn't know how sexualized breastfeeding can be by creeps and how gross it must be to try and pump breast milk in a bathroom. It's a huge injustice, but if you've never been there, it's hard to know, you know?

Regardless of your lack of life experience with the issue, there is no excuse for taking someone's picture in public and holding that person up for ridicule on social media. But, beyond handling one mean person, the time and care this very smart mom took to address common breastfeeding complaints does a huge service for everyone involved, from hungry babies to ignorant gawkers, and other moms just trying to eat in peace.

And if you happen to be one of those people who are so totally uncomfortable with public breastfeeding, this mom, who signs her letter "The AMAZING mommy you photographed nursing her beautiful child" has this pretty simple piece of advice:

I get that you felt uncomfortable looking at my breasts. Here is a novel idea, don't look at them.