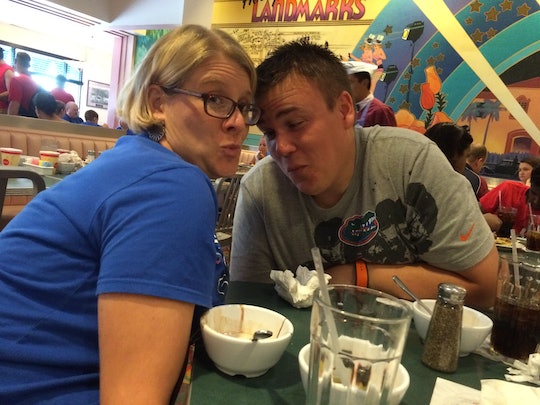 When you become a parent for the first time, it's normal to expect that your sex life to come to a bit of a grinding halt. After my first child barreled through my vagina, I fully expected that the visits to Pound Town would be few and far between. But my sex life wasn't put on hold by sleepless nights, the stress of taking care of a newborn, or by the pain caused by a torn-up perineum. Instead, my sex life was ruined by breastfeeding.

You might be surprised to learn that breastfeeding, which is often touted by moms as "the most natural thing in the world," had such negative effects on my sex life. Well, I was surprised to learn that, too. No one warned me that one of the consequences of breastfeeding would be the utter destruction of my sex drive, even though I later found out that it's a pretty common side effect.

I first realized the toll that breastfeeding took on my sex life right after my first daughter arrived. I pushed for three hours during labor, which did some less-than-sexy things to the ol' babymaker. I'll never forget the first time I tried to wipe with toilet paper, instead of spraying with the hospital-issued squirt bottle. I screamed for my husband to bring me a mirror, so I could find out if there was an actual bowling ball crowning out of my vagina.

My doctor recommended that I wait at least six weeks before having sex with my husband. That was fine with me. As I waddled home from the hospital with ice packs tucked into my hospital-issued granny panties, sex was the furthest thing from my mind. But I assumed that after the waiting period was over, I’d be back in the saddle within a few months.

But as the all-clear date on the calendar approached, I wasn't ready to have sex again. I was breastfeeding, and all I wanted was some nipple cream and a few hours of sleep; sex wasn't even on my radar. While I knew my husband was anxiously awaiting the all-clear, I told him not to clear his schedule. Just the memory of my episiotomy was enough to kill my sex drive, and I was too afraid to even try.

It wasn’t just that I wasn’t in the mood to have sex. I inexplicably got straight-up livid at the sight of my husband getting out of the shower.

Eventually, we made a few half-hearted attempts at intercourse, but the mechanics just weren't there. Not only was I terrified of putting anything in or around the area that had been so recently traumatized, but my vagina clearly couldn't wrap her mind around it, either. I was completely dry. It was sort of like trying to get a dog to take a pill: you can pry her mouth open and shove it right in, but it takes a lot of awkward handling, and basically no one has a good time.

I assumed I was just a little gun-shy, and that the trauma of my first delivery had temporarily squashed my sex drive. But after a few months, when my perineum had fully healed, I still wasn't interested in having sex. In fact, the mere thought of it made me angry. It wasn’t just that I wasn’t in the mood. I inexplicably got straight-up livid at the sight of my husband getting out of the shower. And as much as I hated feeling that way, I felt like I had no control over it.

I didn't know why I felt so resentful toward my husband. Maybe I was just mad he was getting more sleep, I thought to myself. Or maybe my vagina had caught on to the idea that when his penis went in, terrible, giant, painful things came out. What I didn't realize at the time was that breastfeeding can do quite a number on your hormones. That's because the hormone prolactin, which your body produces while breastfeeding, can also cause your sex drive to tank. Even in men, high levels of prolactin have been determined as the cause of low libido.

Because I was breastfeeding, my estrogen levels were also low, and estrogen just so happens to be the hormone that keeps your downstairs hydrated. Without proper lubrication, your vagina can be dry as sandpaper, an effect that is less than helpful for intercourse.

I was shocked by this, to say the least, in part because I had never had a problem with arousal or lubrication. Let me put it this way: Have you ever been on a slip n' slide in the summer? That was my vagina before I started breastfeeding. Have you ever tried to slip n' slide down a dusty gravel driveway? That was my vagina after. To make matters worse, no amount of lube helped, because the hormonal shift also increases inflammation and decreases the flexibility of the vaginal walls.

To his credit, my husband was incredibly patient with me. He'd tell me it was fine, and we didn't have to try to have sex if it was too painful for me. But at that point, it wasn't really about satisfying him anymore. I wanted my old sex life back, and I was hell bent on restoring it. I thought if I could just remind my vagina how much fun it was to have sex, she'd get her sh*t together. But every time we tried, I'd wince in pain, which would cause my husband to get less turned on. And the longer we went without doing it, the more on edge we both were.

It wasn't really about satisfying my husband anymore. I wanted my old sex life back, and I was hell bent on restoring it.

To make matters worse, we started bed-sharing with our baby. She kept getting up at night, and the choice came down to either me getting up every two hours to feed her, or to bring her in our bed for the whole night. We decided to bed-share and go in the guest room to have sex, but the guest room sex trips were few and far between.

While our sex life wasn't great at that point, we were apparently having enough of it, because a few months after I weaned my then-2-year-old daughter, I found out I was pregnant again. After my second daughter was born, I nursed her for three years, which meant that I spent a good 5 years of my life at the mercy of pregnancy and breastfeeding hormones, which got in the way of my having a decent sex life.

At a certain point, I just assumed that not having sex was my new normal. After all, I had two small children, and breastfeeding hormones aside, honestly I was too touched out by the end of the day to feel much sexual desire, anyway. I figured that we just wouldn't have that much sex from now on.

A few months after I weaned my second daughter, however, something changed: I realized that when I saw my husband get out of the shower, I didn't feel rage anymore. One day, he got out of the shower and I had a flicker of feeling like I wouldn't hate it if he kissed my forehead. Our sex life got back on track from there, and the further I got from my breastfeeding days, the better things were in the bedroom.

My kids are now 5 and 8, and I'm so happy to report that I've completely gotten my sexual desire back. I'm no longer furious when I see my husband come out of the shower. In fact, we "shower" together a lot. And when we go on vacation without the kids, I'd even go so far as to say we "shower" together multiple times a day.

I don't regret breastfeeding my girls. But I do think someone should warn breastfeeding moms that breastfeeding can wreak havoc on your sex life. But even though it's totally normal and expected, trust me — it won't be your new normal forever.