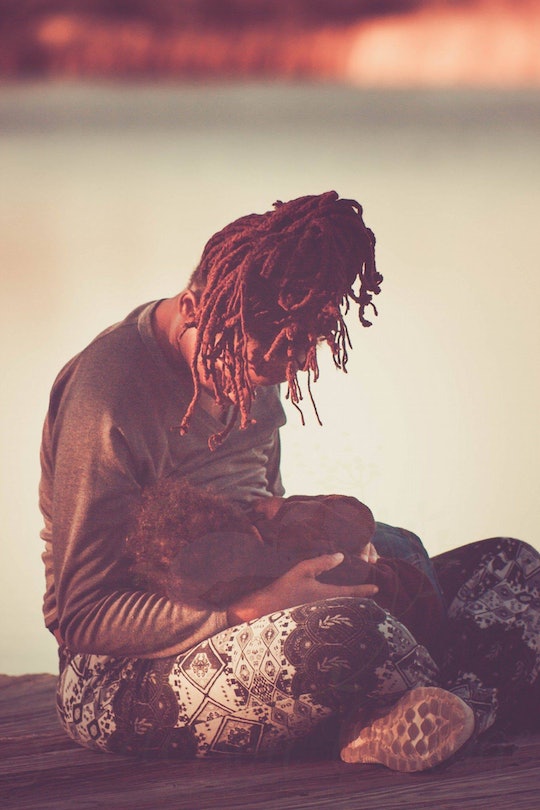 Breastfeeding While Black Comes With Many Challenges, & Too Little Support

At 20 weeks pregnant, I’m far enough from birth to be excited yet close enough to get anxious about what’s ahead. Having done this before, I know that pregnancy is challenging but the real work starts after birth. For me, the most challenging aspect of first time motherhood was getting accustomed to breastfeeding. As a Black woman, society doesn't expect much from me in terms of breastfeeding. Only 65 percent of Black mothers attempt breastfeeding, according to the CDC, with the average duration of breastfeeding being only six-and-a-half weeks, we’re trailing pretty far behind other cohorts. However, the lack of breastfeeding by Black women is just as much of a political issue as it is personal. There are many factors that stand between Black women like myself and a productive breastfeeding relationship. In order to understand why Black women are less likely to breastfeed, we have to start with national politics.

Last month, the United States made headlines when it seemed to prioritize the marketing interests of formula companies over the needs of breastfeeding moms at the United Nations-affiliated World Health Assembly. The U.S. delegation suggested that the phrase “protect, promote and support breastfeeding” as well as a call for policymakers to restrict false messaging on formula be stricken from a pro-breastfeeding resolution proposed by Ecuador. In its challenge, the delegation threatened Ecuador with trade sanctions and military withdrawal as punishment if the language was not removed.

It is not clear why those representatives chose to ignore evidence that being offered formula or exposed to high levels of pro-formula adverting before attempting to breastfeed can lead to a considerable decrease in breastfeeding success. However, it is clear the decision not to stand up to formula companies will disproportionately impact Black women with the intention to breastfeed.

It is automatically assumed that they will formula feed and therefore aren't given the necessary lactation education.

Hospitals are nine times more likely to offer Black women formula, per a study in Pediatrics. And those who reject it express a lack of breastfeeding support both in the hospital and from their families, as found in research published by the Journal Of Maternal Health. For Black women who are fortunate enough to bypass marketing efforts, it gets harder once we get home. Very few Black women have a support network capable of empathizing with breastfeeding issues. That significantly affects our success rates.

Nikia Lawson has been a doula for 22 years, and is also a certified lactation consultant. When she’s not working hard to ensure moms of color are treated humanely during birth, she is providing hands-on suggestions to help Black mothers breastfeed or teaching family breastfeeding classes.

According to Lawson, support is one of the most important things to provide nursing mothers — especially Black mothers. And it is important to cover two obstacles in particular when discussing Black breastfeeding rates.

“Considering that 94 percent of all births happen in the hospital setting, many Black mothers are not given adequate lactation support during their postpartum stay," she tells Romper.

"It is automatically assumed that they will formula feed and therefore aren't given the necessary lactation education and professional support related to breastfeeding. This bias can potentially lead to more long-effecting nursing issues and concerns for black mothers when they arrive home."

Further, "They are unaware of the challenges that come with the initial breastfeeding journey and could have received education and support while they were under the care of lactation professional in the hospital”, she explains.

Lawson notes the lack of breastfeeding models for many younger mothers.

“So many of today's younger (or millennial) black moms are the first generation of breastfeeders in their immediate family. Without adequate historical context to familial breastfeeding support, it can be that much harder for black women to embrace the breastfeeding journey. They simply have not had any visual, mental or physical examples of breastfeeding or the adequate support needed to follow through with long-term breastfeeding success”, she explains.

She says there are shortfalls within the medical system regarding Black women's unique struggles, including a lack of culturally competent lactation professionals.

From the moment Black women give birth, the world around us doubts us. For many Black women, breastfeeding isn't seen as a realistic possibility. As stated above, Black women are encouraged to use formula before they have the opportunity to even try nursing.

Alex White is soon to be a mother of 1-year-old twins. She didn’t have the opportunity to breastfeed her first child, but really wanted to give it a solid attempt once the twins were born. Unfortunately, her enthusiasm wasn’t enough to prepare her for a medical system that expected her to fail from the start. She was able to breastfeed for roughly six weeks before deciding she would be able to be more successful at parenting if she switched to formula.

No one, including the lactation consultant, offered me a pump, donor milk, or anything. The only solution I was offered was to give them formula.

“My mom was actually the first to doubt me," she recalls. "I was about five months pregnant and looking for a breast pump when I told her I was planning to breastfeed. She responded in shock saying ‘Both of them?! For the whole year?’ It felt like she doubted my ability because she didn’t say anything encouraging.

Her mother's doubt hurt, but the heaviest of blows came from interacting with the hospital staff.

“When I arrived at the hospital I let them know I didn’t want any formula given to them. They accepted that. But by day three, when both twins had lost one and a half pounds, the medical professions told me they were losing too much [weight] and she brought formula to the room suggested that I let them have formula to get their blood sugar to stabilize or, 'They aren't going home you.'”

The incident was so traumatic that she began to cry and instead of consoling her, they told her not to get emotional. For White, those early experience greatly shaped her breastfeeding journey. Her husband was supportive but, unfortunately, that wasn’t enough.

“The lack of support was both discouraging and disheartening. No one, including the lactation consultant, offered me a pump, donor milk, or anything. The only solution I was offered was to give them formula."

Images of black slaves wet-nursing white babies have somewhat diluted the value and necessity of breastfeeding in the black community.

Sadly, it’s very common for Black women to encounter relatives that don’t understand the importance of breastfeeding. And this makes it much harder for them to be successful.

Cultural scripts and historical memory can also prevent Black families from understanding the importance of breastfeeding.

“The historical references as it relates to slavery has tainted the innate wisdom for black women to embrace breastfeeding as a birthright! Images of black slaves wet-nursing white babies have somewhat diluted the value and necessity of breastfeeding in the black community," says Lawson.

"Black women being over-sexualized in the media and breast enhancements propagated as a means of self esteem and beauty has tainted the normalization of nursing as a means for healthy, nutritional and sometimes medicinal nourishment for our babies.”

Of course, all of this is made even more difficult to manage when compounded with systemic oppression and typical breastfeeding obstacles like late latches, nipple confusion, and breast pain.

Black women are more likely to experience wage discrimination, per the AAUW, or be overlooked for promotion, according to a McKinsey study. Eurocentric images of “professionalism” limit our ability to progress within a variety of fields without code-switching, adapting to white hair standards, and doing out best to fit into company cultures that prevents us from presenting ourselves authentically.

For Black women who are the single head of household, this will lead to a wide array of financial struggles that make providing shelter a larger priority than providing milk. However, it’s worth noting that Black women in double income homes are not above the strain of limited paternal leave, inadequate access to culturally competent yet not assumption filled care, and lack of resources.

Nearly a year after deciding to quit breastfeeding, Alex took on a position in the NICU milk lab at her local hospital. The experience has allowed her to learn more about breastfeeding, along with the way Black mothers often slip through the cracks. In addition to becoming a nutritionist, she hopes to become a lactation consultant some day.

“If I would have known they could’ve given me a pump, donor milk at the hospital, or even just been able to have them weighed before and after eating to find out how much milk they were getting before they gave them formula, my breastfeeding experience would have gone vastly different,” she explains.

Breastfeeding while Black can be an immensely challenging process. Thankfully, many leaders, both new and old are stepping up to ensure Black women have access to culturally competent resources and policies that make it easier for families.

“I want to not only spread the information I’ve gained from my experience to new moms but I also want to let them know it’s possible to be a successful breastfeeder despite obstacles," White says. "I want to make sure they know all of their options before resorting to formula. I really wanna see more doctors and nurses onboard with breastfeeding.”