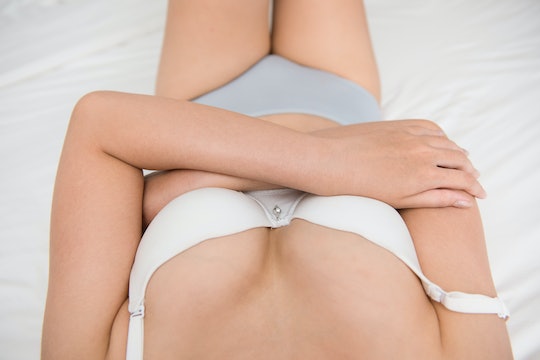 Yes, Your Boobs Can Leak When You Orgasm Even If You're Not Pregnant Or Breastfeeding

If your first reaction to that headline was, "Are you kidding me? We have to leak during orgasm?" you're not the only one. Certain parts about having breasts can seem really unnecessary — at least until you learn about the science behind them and then it makes a little more sense. Once you come to grips with the fact that your breasts might be leaking, you'll probably wonder what leaks from your breasts when you orgasm, because it'll be reassuring to know. Sort of.

What leaks from your breasts when you orgasm depends whether you are pregnant, breastfeeding or none of the above. If you are not pregnant or breastfeeding, the Merck Manual explained that "fondling, suckling, irritation from clothing, or sexual arousal can stimulate a nipple discharge, as can stress." The normal discharge for a non-pregnant, non-breastfeeding woman is typically "a thin, cloudy, whitish, or almost clear fluid that is not sticky." It's not milk, and there won't be much of it. In fact, your partner might not even notice the discharge.

"Normal nipple discharge more commonly occurs in both nipples and is often released when the nipples are compressed or squeezed," explained WebMD. If you are only experiencing discharge from one breast, or if you find that they are spontaneously leaking out of no where, you should see a doctor as it could be a sign that something is up, like an infection or fibroids in your breasts.

It's a whole other story, however, if you are breastfeeding.

The same hormone responsible for milk let-down is also released when you orgasm, meaning that if you are breastfeeding, your body can easily confuse the two. In an article in the Journal of Perinatal Education, Viola Polomeno, RN, defined oxytocin as the hormone "responsible for the milk ejection reflex during breastfeeding and orgasm." She explained, "When a woman is lactating, she may have a milk ejection reflex when she experiences orgasm. This response depends on the timing of the sexual encounter, the mother's breastfeeding experience, and the age of the baby."

That means that if you are breastfeeding and experience leakage during orgasm, it's breastmilk that's dripping, and you can probably expect that to happen when you orgasm until you wean your baby. However, Dr. Hilda R. Hutcherson, an OB-GYN, offered on ShareCare.com that there might be ways to keep that leakage to a minimum: "You may be able to prevent letdown by pumping your breasts or nursing your baby be­fore sex, or wearing a bra with pads to bed."

Finally, if you are pregnant and experiencing leakage during orgasm (or even at other times), that's completely normal. Pregnant women leak colostrum, according to Anne Smith, lactation consultant sharing on Breastfeeding Basics. Smith explained that leaking colostrum is an indication "that your body is going through the changes that prepare your breasts to produce milk for your baby when she arrives." Colostrum can leak overnight, which is more common, but can also leak during the day as well. And, of course, it can leak during orgasm.

The amount you leak during orgasm won't be as much as you would leak if you were breastfeeding (you have that to look forward to!), only a few drops at a time, because your body doesn't produce as much colostrum as it does milk.

There are a few reasons why you might be concerned about leakage from your breasts, whether during orgasm or otherwise. If you are leaking a significant amount of colostrum while pregnant, you'll want to check with your doctor. Likewise, if you are leaking or even lactating when you have not recently given birth, you might have a condition called galactorrhea, as outlined on Healthline, which can be caused by medications, an underlying medical issue, or overstimulation of the nipples. And if the nipple discharge is bloody, that is never normal, explained WebMD. Again, it's important to check with your doctor if you believe you're lactating when you shouldn't be.