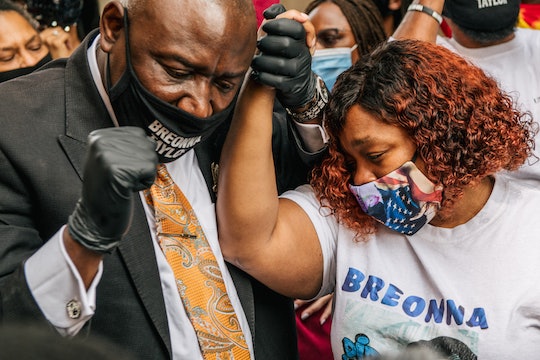 Shortly after a Kentucky grand jury chose not to bring any direct charges against the police officers involved in the fatal shooting of 26-year-old Breonna Taylor, her family's lawyer denounced the decision. In a series of statements civil rights attorney Ben Crump called the proceedings a "sham" and the indictment "insulting and offensive to Breonna Taylor's life, legacy, and family."

While no officers were charged for Taylor's death, the jury indicted one officer, Brett Hankinson, on three counts of wanton endangerment due to bullets they had fired into nearby apartments. Myles Cosgrove and Jon Mattingly, the other two officers involved, were considered by the jury to have been justified in firing multiple shots, including those that killed an unarmed Taylor, during their March 13 raid on her home. According to NBC News, Taylor's family had called for the three officers to be charged with manslaughter.

"The indictment was insulting & offensive to Breonna Taylor's life, legacy, & family," Crump said in a statement tweeted early Thursday. "The grand jury proceedings were a SHAM. The 'wanton endangerment' charge is an example of America's 2 justice systems – protecting white neighbors & ignoring the death of a Black woman."

As part of a narcotics investigation that did not target Taylor or her boyfriend Kenneth Walker as suspects, police obtained a no-knock warrant enabling Hankinson, Cosgrove, and Mattingly to forcibly break down Taylor's front door with a battering ram shortly after midnight on March 13. According to The New York Times, Louisville police have said they believed one of the suspects in their investigation had once used Taylor's apartment to receive packages. An attorney for Taylor's family said the person in question was someone Taylor had previously dated, but had since cut ties with, The New York Times reported.

In the early hours of March 13, Taylor was asleep in her bed with Walker when they heard loud banging at the apartment's front door. According to The New York Times, Walker told police he had thought Taylor's ex was attempting to break in and that both he and and Taylor had yelled out asking for whoever was at the door to identify themselves. When police succeeded in breaking down Taylor's door, Walker, a man licensed to carry a firearm, fired his gun once, hitting Mattingly in the leg. In response, the officers fired off multiple shots, five of which struck Taylor and killed her. The paper reported that 10 rounds fired by Hankison were determined to have been fired blindly into both Taylor's apartment and a neighbor's, resulting in his dismissal from the force and eventually his indictment.

In a statement released Wednesday over Twitter, Crump slammed the grand jury's decision as "another example of no accountability for the genocide of persons of color by white police officers."

Crump argued the jury's decision amounted to "the most egregious disrespect of Black people, especially Black women, killed by police in America."

In an interview on NBC's TODAY show, Crump said it didn't make sense that an officer should be charged with wanton endangerment for bullets fired into the apartment of a white neighbor "but not for the bullets going into Breonna Taylor's body." Crump also said the jury had done "nothing to give Breonna Taylor a voice."

On Wednesday, Taylor's sister, Juniyah Palmer, took to her personal Instagram to apologize to Taylor, saying she had been "failed" by the system. "Sister, you was failed by a system you worked hard for and I am so sorry," Palmer wrote in her Instagram Story. "We was failed as a family."