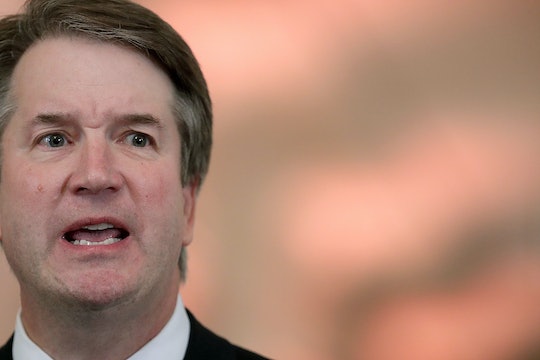 Brett Kavanaugh Has Some Pretty Problematic Views On Gun Control

If he is confirmed by the Senate to serve as a new justice on the Supreme Court of the United States, Kavanaugh would likely move the court in a more conservative direction for years to come. And in gun violence prevention policy specifically, Kavanaugh has made it clear where he stands.

Kavanaugh seems to be a strong supporter of broad gun rights under the Second Amendment, according to The Los Angeles Times. The outlet specifically noted that in 2011, Kavanaugh filed a 52-page dissent when the appeals court upheld a District of Columbia ordinance prohibiting semiautomatic rifles and magazines holding more than 10 rounds by a 2-1 vote.

Kavanaugh wrote at the time that he thought the ban on semiautomatic rifles was unconstitutional, since the weapons are in common use in the U.S. He wrote, according to The Los Angeles Times:

As one who was born here, grew up in this community in the late 1960s, 1970s and 1980s, and has lived and worked in this area almost all of his life, I am acutely aware of the gun, drug and gang violence that has plagued all of us…. But our task is to apply the Constitution and the precedents of the Supreme Court, regardless of whether the result is one we agree with as a matter of first principles or policy.

To get a good sense of what Kavanaugh's record regarding gun safety policy is like, look no further than the National Rifle Association's statement about his nomination. Chris W. Cox, Executive Director, NRA-ILA, said of the nomination Monday:

President Trump has made another outstanding choice in nominating Brett Kavanaugh for the U.S. Supreme Court. He has an impressive record that demonstrates his strong support for the Second Amendment.

And Cox went on to write:

In the Heller decision, the Court held that the Second Amendment guarantees an individual's right to possess a firearm in the home for self-defense, and shot down a decades-old ban on handgun possession in D.C. plus a safe storage law which required that firearms in the home be stored unloaded and disassembled or bound by locking device, according to the Giffords Law Center to Prevent Gun Violence.

The NRA specifically works to uphold the Second Amendment, and if the group is pleased by Kavanaugh's nomination, that's not a great sign when it comes to his track record on gun safety measure policy and in regards to how they think he'll vote on the topic as a part of SCOTUS.

Brett Kavanaugh is a true Second Amendment radical. He believes assault weapon bans are unconstitutional, a position way out of the judicial mainstream, far to the right of even late Justice Scalia.

Part of why Kavanaugh's views on gun safety and gun violence prevention are so problematic is because they're not in line with the sentiment of most Americans. Most Americans support stricter gun laws, The Hill reported in February.

Specifically, Kavanaugh's views on banning on semiautomatic rifles are at odds with the majority of the people he would be serving as a Supreme Court justice. A USA Today poll from late February found that 63 percent of respondents believe that semi-automatic weapons like the AR-15 should be banned. The poll found that even gun owners are inclined to support such a measure, but Kavanaugh doesn't seem to agree, based on his 2011 dissenting opinion, according to Teen Vogue.

Kavanaugh was only just nominated on Monday night, and will now have to go through what is likely to be a lengthy and heated confirmation process. He may be asked to further clarify his gun safety views by senators looking to determine how he'll vote in future cases before SCOTUS.

But his past record regarding his votes on gun safety policy is already at odds with the majority of Americans, and problematic when it comes to seeking rational gun safety measures that could protect Americans and their families from the unprecedented levels of gun violence the country faces today.