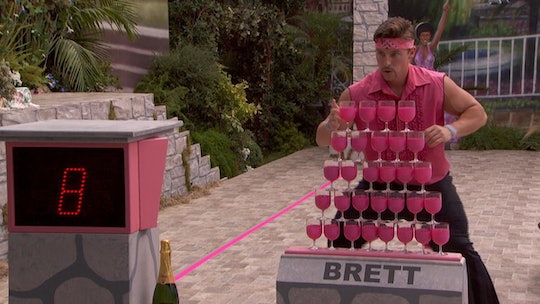 Sam Doesn't Use Her Power On 'Big Brother' & Someone Goes Home

It looks like this season of Big Brother will never have a clean vote. For the third week in a row, the votes did not fall the way most of the people in the house expected it to, leading to yet another blindside. However, this eviction came with an extra dose of drama due to Brett's eviction speech. Still, even with his harsh words, Brett ended up staying on Big Brother, at least for another week.

Leading up to the eviction the house was clearly divided about which one of the "bros" to send out the door. For Level 6 it meant losing one of their own alliance members either way the votes fell. However, after a discussion about each bro's weaknesses, it was decided that it was more beneficial to keep Brett and send Winston packing. On the other side of the house though, Kaitlyn was gunning for Brett to be sent home, especially after he mocked her during the veto meeting.

Tyler, who's been playing both sides of the house, finally found himself caught in a real dilemma. His alliance wanted to send Winston home, but Kaitlyn wanted Brett gone. Since the vote would be split 6-5 Tyler knew that no matter which way he voted his true allegiance in the house would finally be revealed.

Thus, going into the eviction, many viewers still weren't entirely sure which way the votes would fall, but before the voting could begin, both Winston and Brett gave speeches to try to convince their fellow houseguests why they should stay in the house. While Winston's speech was rather tame, Brett decided to use his time to attack Rockstar.

First, he apologized to Kaitlyn, presumably for his actions during the veto ceremony and everything else that probably transpired after that. However, he then took his apology and step further by seemingly giving Kaitlyn valuable information. "I'd love your vote," he said to Kaitlyn. "Rockstar came to me and said, 'I'm going to flip on this vote, make it a 6-5, and pin it on Kaitlyn moving forward.'"

Although there wasn't much chance for Rockstar to defend herself before the voting took place, after the votes were in and Brett ending up staying in the house, with the 6-5 vote he predicted, Rockstar went on the defensive. Once Winston was at the door she called out Brett for lying and asked him when she ever had any kind of private conversation with him. She also told him it was incredibly disrespectful to say that on her daughter's birthday, which, in Brett's defense he probably didn't know about.

Still, Rockstar did make a good point when she said, "The public saw who I voted out. It was you. We will get you out again." And that, at the very least, every one knows is true. Rockstar stuck to her word and she voted to send Brett home. It was actually Tyler who lied to Kaitlyn and the rest of their side of the house and he was the one who voted for Winston to go. That said, will Kaitlyn believe Rockstar or will she actual listen to Brett? It seems much more likely that Kaitlyn will trust Rockstar over Brett, but as fans have already seen, you can never really know what Kaitlyn's going to do.

Regardless, going into this head-of-household competition everyone will definitely be vying for power as there are many targets in the house right now. What most of the houseguests don't know, however, is since Sam didn't use her power to save Winston it means whoever gets evicted next week automatically has the chance to return to the house. Thus, no matter who wins HOH, next week could end up being a dud week regardless. Viewers will just have to wait and see how this will all play out.