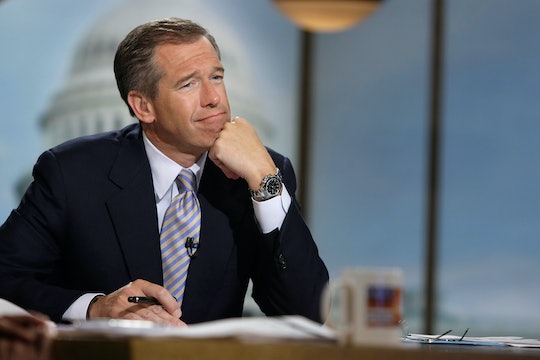 Brian Williams Returns to NBC 'Nightly News,' & The Internet Has Lots Of Feelings

In early February, Nightly News host Brian Williams was temporarily suspended from his position on NBC after making misleading claims about his time spent covering the Iraq War in 2003. NBC was caught up in plenty of turmoil when veterans challenged the anchor's story, when he said he faced enemy fire while in a helicopter, and the network suspended Williams for a period of six months without pay. But now, over six months after his suspension, the most widely watched news anchor in the United States is back. Brian Williams returned to NBC's Nightly News on Tuesday to fill in for his successor, Lester Holt, while the latter was out sick.

Williams anchored a report on Los Angeles schools closing as Los Angeles Unified School District officials updated the public on the threat that made them close schools city-wide. The threat was later revealed to be a hoax, and investigations are ongoing into who was behind the very expensive (and disruptive) prank. With Holt under the weather, Williams stepped back into his old role for the first time since his swift suspension earlier in the year.

Williams had already returned to NBC screens, as MSNBC's live news anchor in September, when NBC brought him back — albeit in the lower-paying, less stable MSNBC role. His substitute, Lester Holt, took over the Nightly News anchor position full-time.

Now that he'll be back on the show — even if only for one special news program — the Internet is having all sorts of feels about it. Well — mainly sarcastic ones. People have also been quick to note that Williams' first news report back on Nightly News is about a hoax — rather fitting, no?

But in all honesty, I still respect Brian Williams. Not for his brave story that did not actually happen back in 2003, but simply because it must take a certain level of bravery to get back on the Nightly News show after everything that went down, and when viewers seem to (very clearly) remember it all.