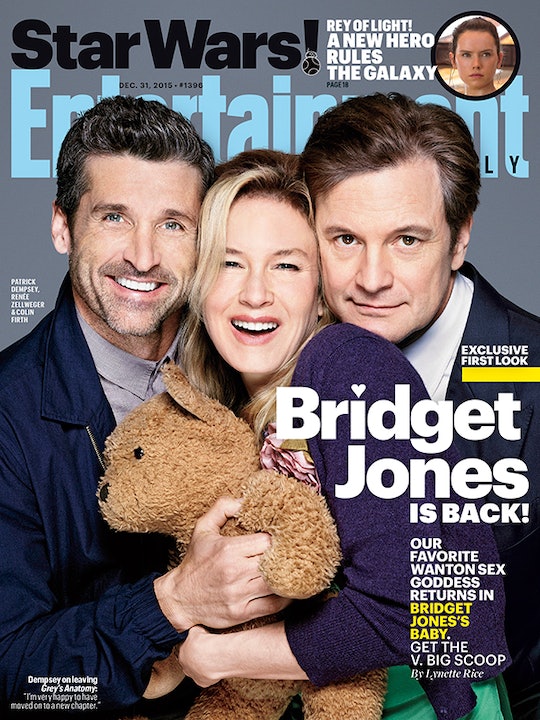 Bridget Jones, Single Mom, Covers 'Entertainment Weekly,' But How Has Her Character Changed?

Fourteen years after Bridget Jones's Diary, Renée Zellweger is back in her iconic role, and Bridget Jones is on the cover of Entertainment Weekly to promote Bridget Jones's Baby. So what's our girl been up to all this time?Bridget Jones's Diary saw Zellweger's Jones as a lovable but hapless single woman whose number one goal, aside from drinking less vodka and losing weight, was to land a man. Although she started off pursuing her boss, played by Hugh Grant, she'd changed her tune by the end of the film, and realized that she really wanted to be with Mark Darcy, played by Colin Firth. Three years later, Bridget Jones: The Edge of Reason picked up a few weeks later. Jones and Darcy were now dating, and although it had only been a month, Jones was already thirsty for that ring, eventually scoring it at the end of the film.

Fans who assumed that the pair lived happily ever after are in for a surprise: in Bridget Jones's Baby, premiering in September 2016, Jones is, as you may have guessed, pregnant. But she's still single, and she's not sure who the father is; it might be Darcy, or it could be Jack Qwant, a new character played by Patrick Dempsey (#BridgetJonesproblems). Oh, and Ed Sheeran fits in there somewhere, as well.

Now I wonder, is Bridget Jones single by choice? It's been well over a decade since she started on her self-improvement journey; could she finally be happy in her own skin? The unknown paternity implies that her pregnancy was unintended, but the title seems to suggest that she's keeping the pregnancy. Does she intend to raise it on her own? It's becoming an increasingly popular choice; the New York Times reports that while the rate of single motherhood on the whole has been declining since 2008, the rate of single mothers over 35 has been climbing. Seeing that experience represented in a feature film could be a great thing for the many, many women choosing to have kids on their own, especially since, knowing Jones, her approach will be far from Pinterest-perfect.

Maybe Jones has finally decided that she doesn't need a man to make her whole, which would be refreshing. The only question then is whether fans will respond to a Jones who isn't a smoking, drinking, husband-seeking hot mess? Will they be as entertained by a woman who isn't waiting for someone else to choose her and make her okay, who chooses herself and her kid? We'll find out soon enough.