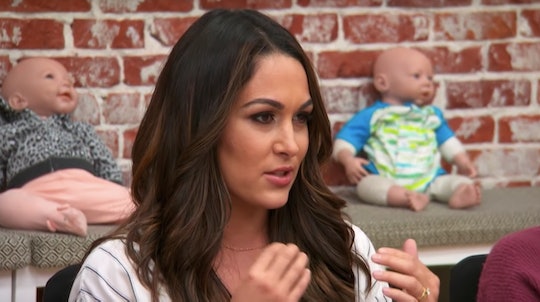 Motherhood is one of the most rewarding jobs around. But as any mother can tell you, it's also full of hurdles and challenges, because moms are always their worst critics. This goes for celebs, too. For example, Total Divas' star and new mom Brie Bella recently opened up about struggling to breastfeed after her milk supply took a "huge dip," according to People.

In a forthcoming episode of Total Divas, set to air on Wednesday, Bella opens up about her struggles and her search for a lactation consultant that might be able to help her increase her milk supply, according to E! News.

“My breast milk’s taken a huge dip,” Bella said in a preview for the upcoming episode of Total Divas. “I used to have enough where I donate. And now I’ve realized in the last month, that I can’t even keep up with her during the day so I’ve had to introduce one bottle of formula a day."

She continued, "I’m trying to pump and do all this stuff, but it’s the stress. I hate pumping. To the point it makes me feel bad when I’m doing it because I’m so miserable.”

The pressure new moms feel to breastfeed is insurmountable. And, Bella's feelings are totally relatable. Some moms are blessed with a seemingly unending supply while others struggle to fill up just one bottle.

Most moms, including Bella, are taught that breast is best but, there are alternatives. For instance, a nonprofit called "Fed is Best" is helping to alleviate some of this guilt with the idea that it doesn't matter how your baby eats, as long as they eat in a loving supportive home. The nonprofit provides support for breastfeeding, mixed-feeding, formula-feeding, pumped-milk-feeding and tube-feeding mothers, according to its mission statement.

WWE wrestling star, Bella, gave birth to her daughter Birdie Joe Danielson in May 2017, which means that her little lady is over a year old, or 17 months to be exact, according to Us Weekly.

Deciding how long to breastfeed is a very personal decision and unique to each mother and child. The World Health Organization recommends that mothers exclusively breastfeed their babies for at least the first six months of life and then continue breastfeeding with the addition of solids for two years or as long as desired. So, if Birdie is over a year old and Bella has been breastfeeding ever since her birth, she would have well surpassed the recommended six months. Even then, a mother's guilt is not so easily resolved.

In fact, a quick sweep of Twitter will show how real moms really feel and that the support is out there:

So it seems that seeking support is the best thing Bella could have done in order to understand why her milk supply is low and how she can increase it. In the upcoming episode, Bella attends a breastfeeding support group meeting, according to People. "These women make me feel like it's OK if you don't want to breastfeed anymore or it's OK to still balance it," Bella said, according to E! News. "To have other women just be like, 'You do you. That's all you have to do.' I haven't felt that in a while, so it means a lot to me right now."

Although it's not clear how Bella will cope with her personal struggles with breastfeeding, there are a few widely used at-home methods to increase milk supply, according to Today's Parent. For example, you can bake a batch of lactation cookies, take supplements, drink teas, or eat a big bowl of oatmeal, the publication noted.

You can catch Bella on Total Divas, which airs Wednesday nights on E!. Although this situation is most certainly tough on Bella, it's a good bet that moms are thankful she's shedding light on this relatable and common struggle.