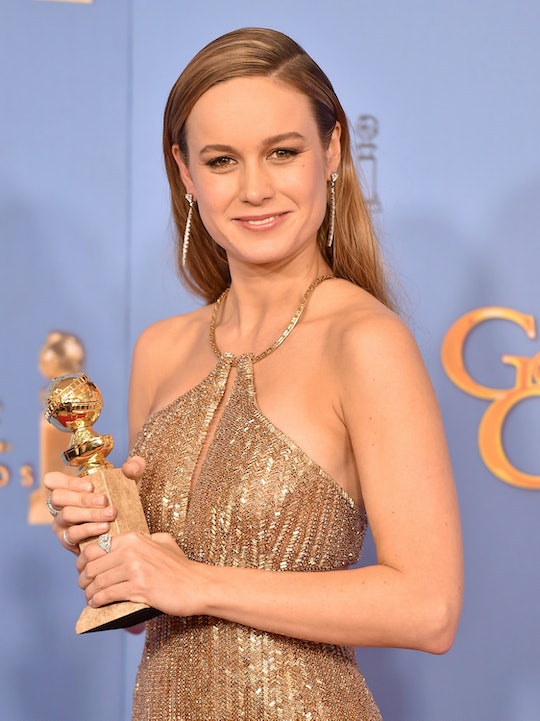 Just as your Golden Globes hangover has been cured, it's time drink down the nominees for the 2016 Oscars. And though, every year, the Academy surprises us with a nomination or two, there was one that was all but inevitable: Brie Larson's 2016 Oscar nomination for Room, the movie your film buff friend describes to you as an Unbreakable Kimmy Schmidt without Tina Fey and with mounds upon mounds of Kleenex.

And that's precisely why Larson's nomination for the role of Ma — a woman kidnapped at 17, and impregnated while held captive — was so inevitable. Larson turned in a performance that was lauded universally by critics, and deservedly so. Particularly when you consider the work Larson put into the role of Ma — as she told Bustle's Anna Klassen, Larson spent months filming in a 10-foot by 10-foot stage (helping her channel Ma's confinement) and heavily researched the role prior to shooting. As she told Bustle:

I wrote journals for her. I made a journal for when she was 10, one when she was 14, and another when she was 16 or 17, to try and get in touch with what those periods of time felt like. What were the trials and tribulations? What were the body image issues? What about any nervousness about making eye contact with the boy you like, or your friends spreading rumors about you ... It took me back to a place that was so real for me.

Add to that the fact that Larson tweaked her diet in order to connect with Ma (eating only bland meals in order to feel "a sense of frustration and longing — wanting something different and something more"), and a Golden Globe win on Sunday, and Larson is officially the frontrunner to win the Oscar.

That said, she does have plenty of competition — Academy favorite Jennifer Lawrence is also nominated for her film, Joy, and comes off the heels of another Golden Globe win on Sunday in the Comedy category.

That said, as much as the Oscars love multi-nominee Lawrence, it's clear that 2016 really is Larson's year. Not only has the actor been nominated for her first Oscar after 18 years in the business (yes, she has been working in Hollywood since 1998), but Larson also starred in last summer's massively successful Trainwreck alongside Amy Schumer.

(Yep, that's Larson on the right!)

So, cross your fingers for next year, J-Law, because B-Lar (does that work? No?) has this one in the bag.