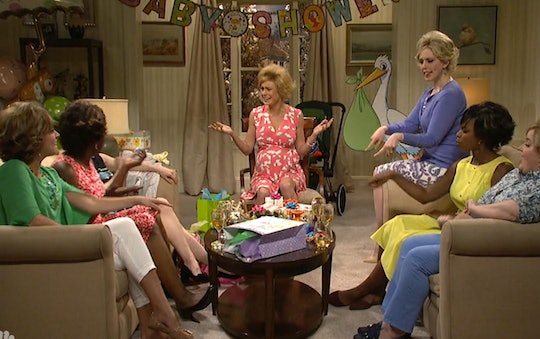 Anytime Saturday Night Live puts all of its female cast members together in one sketch, they tend to kill it. And that was particularly true on Saturday night's episode, hosted by Brie Larson, when the ladies gathered to salute (or maybe warn against) that special marker of motherhood—the Mom Haircut. The hysterical Brie Larson SNL baby shower sketch showed that the telltale 'do, most accurately described as "waterfall in the front, knives in the back," comes for all mothers eventually.

Larson, best known for her Oscar-winning role in Room, played an expectant mom celebrating her baby shower with the women from her new suburban neighborhood. They quickly informed her that merely giving birth would not make her a mother. No, the real signifier would be when she got (cue the ominous music)... "The Cut." Sure enough, while Larson's character sported luscious mermaid hair, everyone else in the room had the haircut "that looks like you’re going to a formal event, but on the way you were struck by lightning."

Of course, none of them wanted the Mom Haircut. But it came for them anyway. And the Stepford-esque cult of women described the moments when they knew it was time to lop off their longer locks in all sorts of amazing ways.

For Aidy Bryant's character, the change happened suddenly. "I completely blacked out, and I came to in the parking lot of a Marshall's Home Goods," she said, holding a "rustic sign that just said the single word, 'Home.'" For Vanessa Bayer's character, it was when she went into her bathroom and felt suddenly that it represented the ocean, and must therefore be decorated with soap in the shape of a flip-flop.

Though Larson's character insisted the haircut simply wasn't for her, the other women quickly pointed out that she was already starting to show symptoms of impending cut-dom. After all, she was folding a gift bag to save it for later! As Kate McKinnon's character revealed, because of moms like them, there were "only seven bags in this entire county."

And soon, the power of "The Cut" proved too strong to resist, with Larson's initial horror turning to acceptance, and a realization that what her living room really needed was a "big bowl of fake fruit!" Mom transformation, complete.

Overall, the sketch was biting and hilarious, with Vanessa Bayer and Kate McKinnon in particular having the eerie, dead-eyed thing down. SNL has a history of successfully calling out the seemingly-inevitable fashion choices of motherhood, with Tina Fey's Mom Jeans advertisement holding a special place in many hearts. This Mother's Day, the Mom Haircut is a worthy successor.