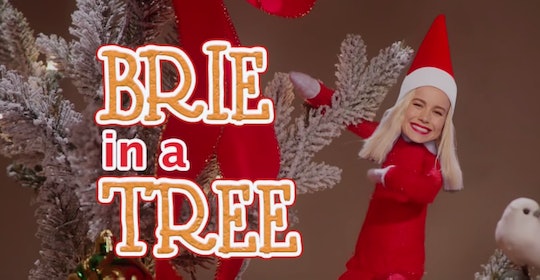 Brie Larson Invented A Sassy, Cursing Elf On The Shelf "To Keep Grownups In Line"

Love it or hate it, people have strong opinions about the Elf on the Shelf. Some parents have a blast creating daily shenanigans for their elf-spy ahead of Christmastime, while others refuse to partake in the "creepy" holiday tradition. Regardless of which camp you happen to fall into, I think Brie Larson's hilarious spin on Elf on the Shelf is something we an all agree on. In that it is definitely something people could use this time of year.

On Dec. 18, Larson stepped in for Jimmy Kimmel in hosting Jimmy Kimmel Live. And she clearly saved the best for last when it came to her opening monologue. "There is a very cool, new holiday product I've been working on," Larson explained. "This is not your typical celebrity endorsement thing. This is something that I invented — something I've been developing for a long time."

The screen suddenly cuts to a commercial for a "holiday helper to keep grownups in line." It's called Brie in a Tree. And it's the adult version of the Elf on the Shelf we never knew we needed.

"Brie in a Tree reduces holiday anxiety by saying all of the things you wish you could," the female narrator explains. "Straighten up, a**hat," Brie in a Tree grumpily snaps before smiling cheerfully. (LOL.) But wait, it gets better.

The next scene features a wife opening a gift from her husband on Christmas morning. "Popcorn, my favorite," she says unenthusiastically. That's when Brie in a Tree intervenes.

"Hey, no yeah, you. You think popcorn is a gift? This woman squeezed out an 8-pound kid for you, and you bought her a f***ing snack?" Brie berates the husband. "If you're not back here in one hour with jewelry and a masseuse, that tin is going straight up your *ss."

Brie in a Tree is great for office parties, too. She helps a woman who is hit on by a creepy coworker under the mistletoe. "Back to your cubicle, Jerry!" Brie exclaims, before spraying the male coworker with mace.

Brie will even keep an eye on your cheap friends and neighbors. "Hey, are you seriously trying to leave this party with the bottle of wine that you brought? Drop the pinot, you d*ck," Brie warns. When the woman still turns to leave still, Brie shouts, "Get back here!" and leaps at her face.

The parody ends with a list of situations Brie in a Tree will help put a stop to during the holidays, including: unwanted carolers, ugly sweater parties, families who wear matching pajamas, buying someone's kid a drum set, adults on Santa's lap, and those stupid reindeer antlers for the car, and much more!

In all seriousness, in case you're looking for a more low-maintenance holiday tradition with your family, there are other options out there aside from the Elf on the Shelf. The Reindeer in Here, for example, helps Santa get to know each child better — rather than act as a spy for Old Saint Nick. Or, there's Santa's Lazy Gnome, which does keep a lookout for Santa, but is less creepy and doesn't require being moved daily.

But seriously, though. Too bad Brie in a Tree doesn't actually exist.

More Like This
Scott Calvin Is Ready To Retire In The Santa Clauses Series Coming To Disney+
Every State’s Favorite Halloween Movie For Kids In 2022
Khloé Kardashian Reveals Tristan Thompson Proposed To Her Last Year & Why She Said No
Kim Kardashian Stars In Hilarious House Of The Dragon Parody, The Targashians