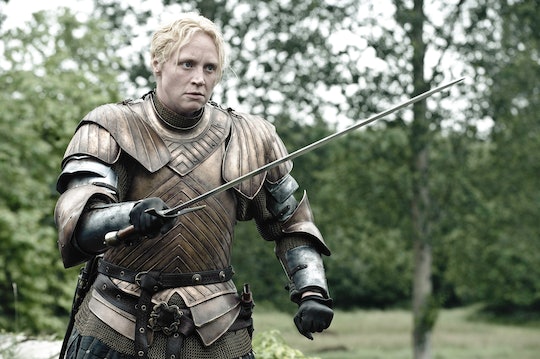 Recently, Game of Thrones author George R. R. Martin made a very rare public appearance at Balticon, the Comic Con of Baltimore, Maryland. Besides reading an all-new chapter from the final book in the Game of Thrones series, The Winds of Winter, he also revealed one of Brienne of Tarth's ancestors on Game of Thrones, giving new light to Brienne's otherwise dark backstory.

Brienne has had a hard life both in the books and on the show. She lost both her mother and her siblings, and though her father attempted to marry her off, Brienne suffered through three broken engagements. Back in Season 5, Brienne revealed that she was mocked, often called "Brienne the Beauty" as a joke, and it was Renly that was one of the only men that was ever kind to her.

But it seems the height that Brienne actually comes from the legendary Ser Duncan the Tall, her ancestor. If you're not a diehard Game of Thrones fan you might have no idea who Ser Duncan the Tall is and why he's so important. Ser Duncan the Tall is one of the most famous knights in all of Westeros and George R. R. Martin even wrote three adventure novellas about the knight: The Hedge Knight, The Sworn Sword, and The Mystery Knight. These novellas take place about 90 years before the current books and follow Ser Duncan, also known as "Dunk", and his squire "Egg", the future king Aegon V Targaryen. The novellas were also turned into graphic novels by Marvel, and it's clear George R.R. Martin has a deep love for the character.

Book fans have long ago suspected Brienne might be a descendant of Ser Duncan, and have seen similarities between Dunk and Egg and Brienne and Podrick. Additionally, in the books Martin occasionally used the same phrase "thick as a castle wall" to refer to both Brienne and Dunk, thereby supporting the theory. Now that Martin has made it clear that there is a direct connection between Brienne and this legendary hero, it makes Brienne even more of a badass character, and it's no surprise that Tormund has fallen head over heels for her.