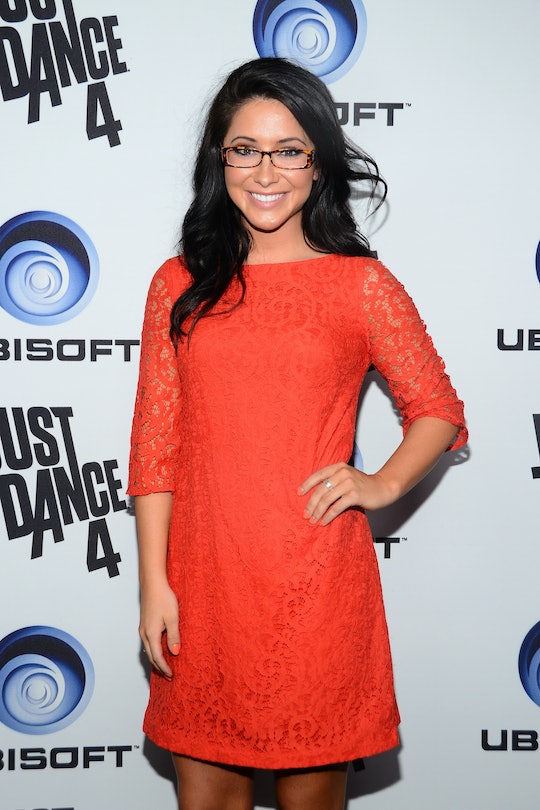 Bristol Palin might now be chronicling her life as a 27-year-old single mom-of-three in Texas for the MTV reality show Teen Mom OG, but it doesn't seem to have kept her oldest son, Tripp, from spending plenty of quality time with his dad, Levi Johnston, in her their home state of Alaska. The friendly exes definitely seem to be making long-distance parenting work, but not everyone found her latest Instagram update to be the sweet father/son moment she intended it to be. Bristol Palin posted a "proud" pic of her son with a dead caribou during an Alaskan hunting trip with Johnston, and even though she's clearly totally here for it, some of her followers found the photo pretty unsettling.

Palin shared the snap on Instagram Tuesday, and in it, 9-year-old Tripp can be seen fist-bumping his dad while posing behind the animal, who is lying with a hunting rifle perched on its chest. In the caption, Palin wrote that she was "super proud of [her] son," and praised Johnston and his wife, Sunny, for "providing [Tripp] with such incredible life learning experiences at such a young age." Sunny also shared the photo on her own Instagram page, and shared that the pic marked a big milestone for her step-son: she wrote, "Tripp’s first big game animal all by himself! One and done shot at 150 yards with his 243."

Palin's pride over her son's emerging hunting prowess isn't exactly surprising — his grandmother, after all, is former Alaska governor Sarah Palin, who has long been an advocate for gun ownership, and who described herself as "a lifelong member of the NRA" in her 2009 memoir, Going Rogue, according to On The Issues. In fact, Palin also shared the photo on her own Instagram account, writing that she was "proud of Tripp’s successful harvest with his dad," and sharing additional photos of herself and her family members on various hunting trips.

But while hunting might be a way of life for the Palins, Bristol at least seemed to understand that the pic might be jarring to some who aren't used to the idea of killing what they eat. Yet her message to naysayers wasn't exactly sympathetic: toward the end of her post, she wrote, "before you start calling [PETA] - remember where your beef/chicken come from.. it doesn’t get more organic than this."

Her unapologetic explanation didn't exactly keep the critics at bay, however. Though there was a lot of debate in the post's comments about the ethics of hunting for your own meat vs. buying it in the grocery store, others were more concerned simply about the idea of her praising her son for posing with a dead animal and a rifle. Though some users wrote that Bristol was "disgusting" to post the pic, and blasted the family for "killing innocent animals," others just thought she probably should have kept it to herself, with one writing, "I am not anti-hunting but anti-showing pictures of dead animals on social media, that’s all..."

Many of Bristol's followers though, chimed in to argue that turning the debate into one about gun violence is missing the entire point, since the point of the trip seemed to be less about hunting as a fun hobby, and more about "filling the freezer" with meat for the year. In a separate Instagram pic from their hunting trip, Sunny wrote that her daughter Breeze "provided for us last year and now Tripp this year." And in a comment on Bristol's original post, one user wrote, "This is our Alaskan way of life, why do people feel entitled to an opinion on it at all?"

One positive thing it seems that most people could agree on at least? The fact that, guns and hunting aside, the trip seemed like a great bonding opportunity between Tripp and his dad, and that it was particularly awesome to see that Bristol and Sunny seem to have a good relationship.

One user praised Bristol's caption, and wrote, "Why can we not celebrate the level of maturity and grace [Bristol] is showing to her son’s father and stepmother?!" while another said, "As a stepmom myself, props to you for being cool and mature enough to give her cred on social media." And the gesture clearly seemed to have gone over well: Sunny commented on Bristol's post, and wrote, "We are thankful for you too lady! Thanks for letting him go."

Given the ongoing heated debate about guns in America, it's not exactly surprising that Bristol's post sparked a fair amount of criticism — especially given that she and her family have long been controversial figures. And honestly, if hunting isn't something you support, then seeing a young boy posing with a dead caribou really does feel unsettling. But it's also pretty clear that the expedition was a bonding experience for Tripp and his family, and considering that it's also meant that he can see his mom publicly applauding his dad and step mom on social media? If nothing else, it still seems like a pretty great co-parenting win.