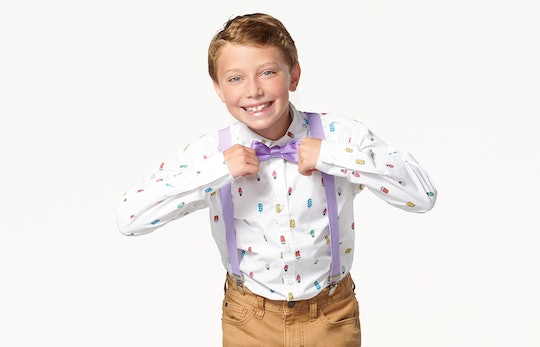 Bristol Palin's Son, Tripp, Has Joined The Cast Of 'Dancing With the Stars: Juniors'

We've reached peak reality television, people. At this point, the casts of most reality shows are mainly comprised of "stars" who are famous for being on other reality shows, and now, in 2018, we've got a crop of third generation reality stars looking to worm their way into our living rooms. Dancing with the Stars must have finally run out of adults with recognizable names, because they've gone and made a kids' spinoff, and the inaugural season of DWTS: Juniors features Bristol Palin's son, Tripp.

You may remember Tripp (not to be confused with his uncles, Track and Trig) as the baby bump that drew intense scrutiny during the 2008 presidential election. Bristol was 17 at the time, and teen pregnancy was, shall we say, at odds with the very conservative views of her mother, the former Alaska Gov. Sarah Palin, who happened to be the Republican vice presidential candidate. Bristol later became an abstinence advocate, albeit not a very convincing one. In a 2009 Fox News interview, she told host Greta Van Susteren, "I think abstinence is, like — like, the — I don't know how to put it — like, the main — everyone should be abstinent or whatever, but it's not realistic at all."

But now Tripp is all grown up, or at least, grown enough to warrant his own IMDb page. This actually isn't his first foray into reality TV; he appeared on the short-lived Bristol Palin: Life's a Tripp in 2012, when he was just 3 years old. His most memorable moment from that series was when he called his aunt, Willow, the F-word. Bristol, for her part, claimed that it was the four-letter F-word, not the six-letter one, but the context in which he used it, combined with what some believed was an audible "T" sound at the end of the censored word, make that a little hard to believe. See for yourself.

Tripp told Us Weekly that he was "more nervous than excited" to appear on DTWS, and his mentor, Jenna Johnson, said that Bristol, a two-time veteran of the dancing competition, was very involved in his rehearsals, giving him pointers on his performance . "It's very hard for someone who has never danced before," Johnson told Us. "This is a very daunting place. It's covered in lights and cameras and costumes."

Bristol described herself as "a complete pageant mom" in an interview with Entertainment Tonight, admitting that it was "more nerve-racking" to watch Tripp perform than it was to appear herself, as she did in 2010 and again in 2012. Although he was on board at first, Bristol said that Tripp wanted to back out once he learned exactly what he was in for. "I showed him some clips of young dancers — 'I am not doing it!' Like, we already signed the contract, like, you have to do it!" That contract, according to TMZ, guarantees Tripp $50k just for showing up, and up to $130k if he wins. It also contains a clauses that permits him to simultaneously appear on Teen Mom OG, his mother's latest reality TV venture.

At 9 years old, Tripp is one of the youngest cast members, but he's probably not the most famous one. That honor belongs to Alana "Honey Boo Boo" Thompson, People reported, a veteran of TLC's Toddlers and Tiaras and Here Comes Honey Boo Boo who's currently co-starring in the second season of Mama June: From Not to Hot. Also on the roster are the kid who plays Jack on black-ish, young Gamora from Avengers: Infinity War, Stevie Wonder's kid, and the little sister of Dance Moms star Maddie Ziegler. Good luck to all of them, and I hope they get better representation soon.