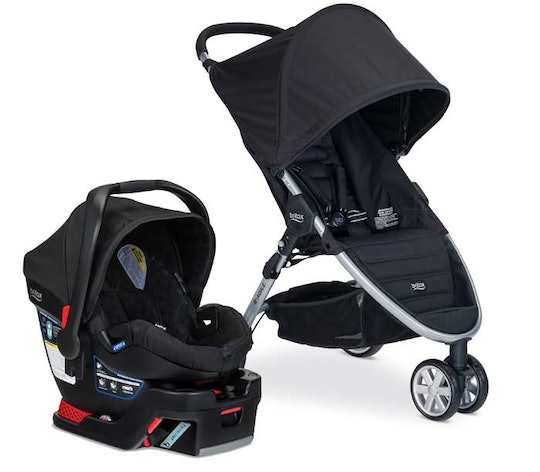 On Thursday, the U.S. Consumer Product Safety Commission announced the recall of two Britax products: the B-Safe 35 carseat and the B-Ready stroller/travel system. Both recalls were issued by Britax, and according to the CPSC, "the foam padding on the stroller’s arm bar [and the carseats handle] can come off in fragments if the child bites the arm bar, posing a choking hazard."

Both recalls came about after Britax received reports of "children biting the arm bar foam padding," according to the Huffington Post. In the case of the stroller, there were "five reports of children choking or gagging on foam fragments" and in the case of the carseat, some handles developed "fractures, cracks and/or break[s]...while in use," according to the CPSC. (And, in one case, a break actually caused injury to an "infant...when the carrier fell to the ground.")

The CPSC advised consumers with affected strollers to immediately remove the foam-padded bar:

However, those with affected carseats should stop carrying the seat by the handle immediately, according to the CPSC:

Consumers should immediately stop carrying the car seat by the handle until the repair is installed.

Britax advised those with affected strollers and/or carseats to contact them as soon as possible, as the company will send replacement parts/repair kits. (Consumers who previously registered their product(s) with Britax should automatically receive said parts/kit.)

More Like This
New Infant Safe Sleep Guidelines From The AAP Discourage Bed-Sharing
Ginger Zee Had A Perfect Response After A Troll Asked Her "Who's Raising Your Kids?"
Victoria Beckham Reflects On Being Forced To Weigh Herself On TV After Giving Birth
It's A Beautiful Day In Jenny Slate’s Neighborhood