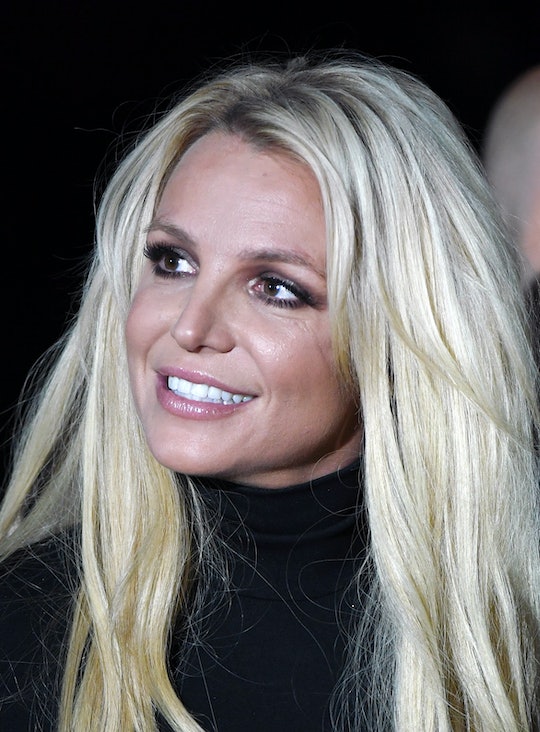 When it comes to prioritizing your mental and emotional well-being — and, particularly, taking preventative measures to ensure that you stay well — the world has come a very, very long way in the past few decades. Highlighting this perfectly is Britney Spears' post about needing "me time," which comes a few days after it was reported that she had entered a wellness facility for treatment.

Earlier this week, according to TIME, Spears had checked herself into a facility for "self-care," not longer after People reported that her father, Jamie Spears, was in declining health. He reportedly had his colon rupture, which has led to a situation in which he requires assistance and care.

Back in 2008, Spears' father was granted conservatorship over her, The Guardian reported, which means that he manages everything from her finances to her career. Given that the pop star has been doing so well in the time since, it's clear that she and her father are very close.

So close, in fact, Spears thought it was best to actually cancel her new tour in order to spend time with her father. On Jan. 4, The New York Times reported she decided to take an "indefinite hiatus" from her career, in order to take care of her father.

“I don’t even know where to start with this, because this is so tough for me to say,” Spears wrote on social media earlier this year. “I will not be performing my new show Domination. I’ve been looking forward to this show and seeing all of you this year, so doing this breaks my heart.”

Just a few months later, Spears checked into a facility for her own self-care, HuffPost reported, which is crucial not only for someone with a highly public profile, but also caretakers for those who are sick. (It's not uncommon for celebrities to do this, and for good reason.)

Spears' ex-husband Kevin Federline even commended her for the decision. “Kevin commends Britney for recognizing that she needs to take a step back and that she is taking reasonable steps to dealing with her situation in a responsible way,” Federline’s attorney Mark Vincent Kaplan told Entertainment Tonight. “He wishes everyone well.”

However, even more extraordinary is the difference in how fans and followers are responding to Spears' decision. On Wednesday night, she posted on Instagram a quote that read, "Fall in love with taking care of yourself. Mind. Body. Spirit," soon after several media outlets, including Rolling Stone, reported that she had entered a mental health facility.

"We’ll never understand 'What it’s Like to be Me.' Take all the time you need Queen," Derrick Barry, from America's Got Talent and RuPaul's Drag Race responded.

"Get well soon beautiful lady. You are still an inspiration to many of us, even now in times of pain your announcement of needing me time lets others know that even the most amazing suffer from mental health problems every now and then," said another follower.

It seems that most people are showing overwhelming support for Spears, who is undoubtedly going through an extremely challenging time with her father's health, as he's been the person who's been responsible for ensuring her own stability over the past decade. It's a huge deal for anyone, but especially Spears, who has been particularly spotlighted for her health and wellness.

"Caregivers who pay attention to their own physical and emotional health are better able to handle the challenges of supporting someone," The National Alliance on Mental Illness explained. "They adapt to changes, build strong relationships and recover from setbacks. The ups and downs in your family member’s illness can have a huge impact on you. Improving your relationship with yourself by maintaining your physical and mental health makes you more resilient, helping you weather hard times and enjoy good ones."

The important thing to remember is that though we do not know with certainty exactly why Spears decided to reportedly admit herself to the facility, whether she's seeking treatment or trying to engage in some preventative self-care, asking for help is always a net positive in someone's life, and we should always be supporting and affirming those who recognize their limits, and when it's time for a break.