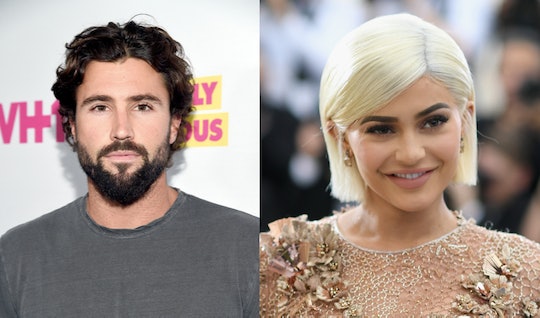 Kylie Jenner Didn't Tell Brody Jenner She Was Pregnant, & Here's Why That Might Be

Although fans and media outlets alike spent months speculating about Kylie Jenner's pregnancy, the 20-year-old new mom actually waited until after the birth of her daughter, Stormi Webster, to confirm the news. In an Instagram post, the beauty mogul explained that she had wanted to keep the experience as private as possible — which even meant keeping her pregnancy under wraps from her extended family. On Thursday, Kylie's half-brother Brody Jenner said he didn't know Kylie was pregnant until she revealed the news to the world, and though the 34-year-old former reality star told TMZ that he'd "love to meet the baby," he explained that, actually, it's been "a couple years" since he and Kylie last saw each other. In other words? Don't expect Brody to make an appearance on next year's Kardashian-Jenner Christmas card.

In all fairness, it isn't entirely surprising that Brody had been left out of the loop about Kylie's pregnancy. She clearly went out of her way to ensure her baby news was kept very quiet, and she largely ducked out of the spotlight entirely. Her close friends and family also went to great lengths to keep the pregnancy a secret — big sis Kim Kardashian even drank a sardine smoothie on The Late Late Show With James Corden to avoid spilling the beans, according to Billboard — and while Kylie and Brody might share a parent (Brody is Caitlyn Jenner's son from a previous marriage) as well as a last name, it doesn't necessarily mean that the are close.

Brody told TMZ that his "relationship [with Kylie has] always been there," but that their busy schedules have kept them from spending a lot of time together. Yet it also seems like the family ties between Brody and the Kar-Jenner sisters is pretty complicated.

Though rumors swirled following Caitlyn Jenner's transition in 2015 that Brody had cut ties with the Kardashians, he explained that even though he was no longer technically related to Kourtney, Kim, and Khloé, according to People, he "still [considered] them [his] sisters," and gave them credit for helping Kendall and Kylie navigate the ups and downs of living in the public eye. Those warm feelings may not have translated into an actual ongoing relationship though: according to Us Weekly, Brody wasn't invited to Kim's 2014 wedding to Kanye West, and after she was held at gunpoint during a robbery at her hotel in Paris in 2016, Brody said that while he did text his former step-sister, he hadn't spoken to her directly.

It's not just the Kardashians that Brody isn't particularly close with, though. In 2015, Caitlyn revealed in an interview with Vanity Fair that she'd long had a strained relationship with her eldest children, and though Brody told E! News that year that he got along "a little more" with Caitlyn after her transition than he did before, Brody's childhood friend Spencer Pratt skewered Caitlyn for being "the worst dad" to Brody when he was growing up, according to The New York Daily News, and that, as Caitlyn, she wasn't much better.

One person who might agree with Pratt's assessment? Khloé Kardashian. In an interview on British morning show Lorraine Thusday, according to People, the pregnant reality star confirmed her relationship with Caitlyn was still rocky — Kardashian is said to have cut ties with Caitlyn after she released her 2017 memoir, The Secrets of My Life — and that she didn't anticipate that would change now that she was expecting her first child.

In other words, well, given that he doesn't have the best relationship with Caitlyn, and given that Caitlyn doesn't seem to have the best relationship with the Kardashian sisters — to whom Kylie is obviously very close — it actually makes a lot of sense that Brody probably doesn't spend a lot of time with his half-sisters, and that he wouldn't have made the short list of people Kylie would have wanted to share her pregnancy news with.

At the same time, there's nothing particularly wrong with the fact that Brody and Kylie aren't super tight, and Brody definitely seemed open to the idea of meeting Kylie's baby if she was interested in having him do that. But since the two seem to live pretty separate lives, a Jenner sibling reunion might not be in the cards anytime soon.