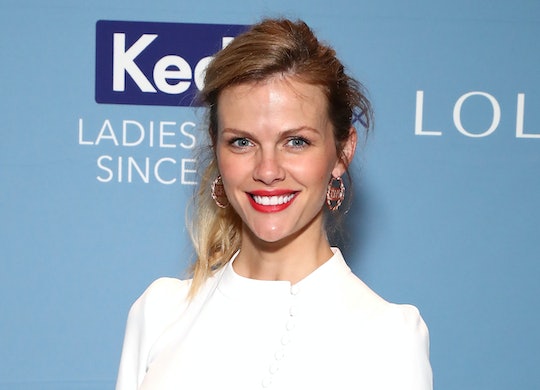 Brooklyn Decker Plans To Use Breast Milk On Her Face, & It's A Trick All Moms Might Want To Try

Any breastfeeding parent knows that breast milk is pretty amazing. Breast milk is often praised by doctors and researchers alike for its protective powers against illnesses and other health problems, and if you Google "breast milk" and "benefits" you'll be treated to a ton of listicles celebrating all of its pros. One pro that isn't as often discussed about breast milk? Its supposed benefits for the face. Yeah. Brooklyn Decker recently shared that she plans to use breast milk on her face after she gives birth to baby number two, and science actually backs her up.

Ever since Decker announced she is pregnant with her second child, she has given a bunch of interviews on a variety of topics, including breast milk. When Decker was asked about breast milk in an interview with Us Weekly, she admitted hearing that “breast milk is good for the face.” Obviously, "good for the face" can mean a lot of things — so, what exactly has Decker heard?

Decker explained, according to Us Weekly:

I heard it’s a cure-all and it gets rid of zits and under eye circles. I was a little too scared to try it the first time around, but I might steal a little milk from this baby and see what happens.

If you perked up at Decker's mention of "zits," many parents likely sympathize with your plight. Post-pregnancy, a lot of parents experience "skyrocketing progesterone and estrogen fluctuations," which can cause "increased sebum production and clogged pores," according to Today's Parent. Translation: there are a lot of parents out there struggling with hormonal acne.

The good news is, a special component of breast milk can potentially clear up your face. Lauric acid, which is found in breast milk, has been found to have "acne-fighting qualities," according to the Telegraph. You might have read about the benefits of lauric acid when researching coconut oil, which is made up of 50 percent lauric acid. It turns out lauric acid can "help fight viral and bacterial infections," which means dabbing some breast milk on your zits might not be a bad idea, according to Dr. Axe. Plus, you won't have to shell out the money for coconut oil (the quality stuff can be really expensive).

As for dark circles under the eyes, I'm happy to report breast milk can also be a cure for this common post-pregnancy affliction. Milk is rife with vitamins A and B6, "which help build new skin cells," according to Health & Care Tips. Not to mention milk is best-known for vitamin D, a component that can restore the elasticity in your skin. By all accounts, it sounds like breast milk can work wonders for your I stayed up all night nursing my baby face.

But is breast milk really the facial miracle science suggests it is? Some parents on websites like Baby Center would definitely say yes. A few parents have even used breast milk on their kids' baby acne, while others have tested it out on their own cold sores and bug bites.

... It worked wonders on her baby acne & my bug bites.

I have been using my daughter's milk for the last few days on a cold sore that decided to show up. Normally my cold sores last a week or more and after only 3 days it's fine.!! Tonight I am trying a facial. First think I noticed was the tightening, which is better than my most expensive wrinkle cream! After washing my skin is so smooth!! My daughter also has been using it in my grandsons eyes because they're a little goopy. There again, his eyes cleared up in 2 days with no other meds. Very excited to try more things.

Of course, it's important to note here that you should consult with your doctor if you have any pressing health concerns — don't simply rely on breast milk if you have a persistent infection or other illness. Additionally, there's nothing wrong with having hormonal acne or dark circles under your eyes. If you do feel uncomfortable with your zits or sleepy eyes, however, it might be worth giving breast milk a shot.