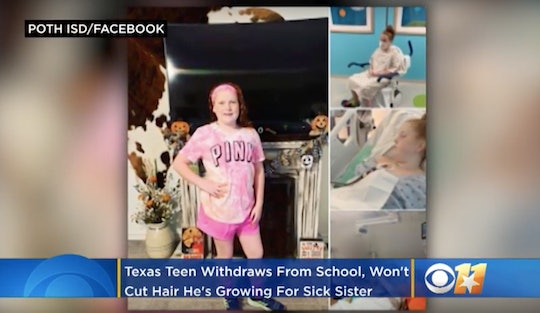 A Texas school district has come under criticism after a male student growing his hair out for his sick sister was told to cut it or face suspension. Officials at Poth Independent School District in Poth, Texas, reportedly told 16-year-old Newt Johnson that long hair was not permitted on male students and that he would have to cut it or leave. But Newt wasn't growing his hair out for fun or for fashion. Rather, his lengthening locks were meant to become a wig for his younger sister whose own hair had begun falling out due to chemotherapy. And so he chose to leave school, opting instead to be home-schooled so that he can continue growing out his hair.

Maggie, Newt's 11-year-old sister, was diagnosed with Wegener's disease, a rare auto immune disease that affects her kidneys, in October, according to NBC News affiliate WOAI/KABB. When her chemotherapy and dialysis treatments began to cause sections of her long, red, curly hair to fall out, Newt was inspired to help her in whatever small way he could. According to WOAI/KABB, Newt came up with the idea of growing out his own hair so that it could be made into a wig for his sister after she told him she liked his hair. "We spend a lot of time together so it really bothered me," Newt told WOAI/KABB. "It made me feel good that I could do something for her."

According to Locks of Love, a nonprofit that makes wigs for children from donated hair, hair must be at least 10 inches long before it can be donated for use in a hairpiece. That posed a problem for Newt, whose school district doesn't allow male students to have long hair. An online copy of the 2019-2020 Poth Independent School District student handbook notes that, "For male students: Hair shall not extend beyond the ear opening on the sides nor beyond the top of a dress shirt collar in the back."

Newt's father told NBC News that although officials at Poth High School knew of Maggie's illness and Newt's reasons for growing out his hair, they cracked down on his lengthening locks. According to NBC News, the principal at Poth High School told Newt to cut his hair over the three-day weekend afforded to students due to Martin Luther King Jr. Day. When Newt refused and returned to school with his hair still four to six inches long, his father told NBC News that school administrators called his mother to pick him up for a haircut.

When Newt's mother asked if her son was being expelled, NBC News reported that school officials said no and that Newt would be welcomed back when he'd cut his hair. The teen told WOAI/KABB that he found the situation stressful. "It really stressed me out because I already worried about my sister," the news outlet reported Newt said.

The student's father told NBC he supported his son's decision and was proud of him for taking a stand. "I'm proud of him," Alan Johnson told the news outlet. "It's disappointing it's come to this. No one wants something like this to happen. But he loves his sister so much, he's made up his mind he's going to help her."

In a since-deleted statement initially shared on Facebook (that was captured via screenshot and shared across the social network), Poth Independent School District Superintendent Paula Renken reportedly said "there was an avenue and process to seek resolution to the issue that the parent chose not to take." She also claimed that "the district's integrity and board approved policies are being maligned and twisted on social media" and that the principal "performed his duties as he is expected to under the policies and procedures in place." Romper has reached out to Renken for additional comment.

Renken also pushed back on those criticizing the school district for not supporting a family with a sick child. "Over $3,000 was raised through donations and given to the family in addition to cards and prayers from students and staff," Renken wrote. "It was never about not supporting a sick child."