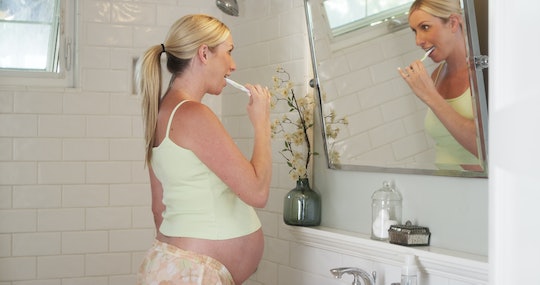 What's the first thing you do after a bout of morning sickness? Brush your teeth, right? Actually, according to dental health experts, that way lies disaster. No one expects the Spanish Inquistion, or that teeth might become a serious issue while they're expecting, but prenatal dental issues are no joke, and trouble often starts in the first trimester. Here's why you shouldn't brush your teeth after morning sickness, plus how you can protect your smile throughout the long nine months.

"Morning sickness can be debilitating for an expecting mother," explains Dr. Manuel A. Cordero, DDS, CPH, MAGD, and President at Academy of General Dentistry, in an email interview with Romper. "When you get sick, the first instinct is usually to brush your teeth, but that’s not the best option." The reason is that stomach acid sticks to your teeth, and if you brush too soon, you're essentially rubbing that acid into your enamel. "As an alternative, try swishing a mixture of water and baking soda around the mouth and brush 30 minutes later," says Cordero.

You can probably guess why vomit and your pearly whites don't exactly mix well. Dr. Steven Brattesani, DDS, a consultant for Smile Pronto, explains to Romper in an email that stomach acid is "extremely caustic to the enamel calcium crystals that make up your teeth." (Yikes.) That's why if you vomit, you should try to neutralize the acid in your mouth before you start scraping away with a toothbrush. If you're not into swishing with baking soda and water, he suggests using a "ph-balancing mint" like flosstabs to counteract the acidic effect. Drinking water or chewing a sugarless piece of gum works, too.

According to the American Pregnancy Association, more than 50 percent of women suffer through some amount of morning sickness. Personally, I only actually vomited twice, and I'm sorry to say I did, in fact, brush my teeth right after. I wasn't sick that often, but if I had been, I might have done some serious damage to my teeth. No dentist ever mentioned this risk to me, despite a first trimester dental visit. Nor did I learn about your increased risk of developing gingivitis during pregnancy, which Brattesani describes as a "primary" dental concern for women. Might I suggest that any dentists who happen to be reading this put up a few pregnancy-centric posters or something?

Indeed, it's not just the first trimester, or morning sickness, that you have to worry about it. "Pregnant women can experience changes in their oral health due to the changes in their hormones, which can cause gum tissues to react differently," says Cordero. "They can experience gingivitis, gingival enlargement, and in rare cases, pregnancy tumors, which typically disappear after giving birth." One thing you don't have to worry about? Losing calcium. According to Cordero, that's just an old wives' tale. "It is impossible to lose calcium from formed enamel unless by acid exposure, which is how cavities and other non-cavity tooth lesions develop," he says.

I never would have guessed that dental health and pregnancy are so linked. But Cordero says that the relationship is so close that a dentist sometimes spots the signs of pregnancy even before a physician. (Enlarged or inflamed oral mucous is one such sign.) In any case, it should come as no surprise that good oral hygiene is crucial throughout all three trimesters. While it might be tempting to avoid making an appointment — you have enough to deal with, after all — the Academy of General Dentistry recommends seeing a dentist as soon as you know you're expecting to make a plan for monitoring your oral health.