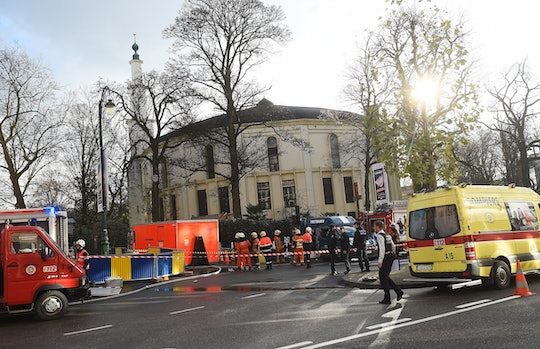 Thursday, after envelopes of white powder were found inside, Brussels' Great Mosque was evacuated. Several envelopes were found, and decontamination units are currently in the building, according to reports. Several rooms have been isolated and sealed off as the units work, and though fire brigade Captain Annie Wibin said the powder was not radioactive, it will take up to six hours to know what the substance is.

It's been reported that 7 to 11 people were taken to the hospital from the mosque, potentially to be decontaminated. The mosque is near the European Commission — basically, European Union headquarters — and remains the oldest mosque in Brussels.

The city has been on its highest terror alert for over a week now, although schools and subways opened again Wednesday. Belgium and France continue to seek two suspects related to the Nov. 13 Paris attacks, identified as 26-year-old Salah Abdeslam and 30-year-old Mohamed Abrini, both from the Molenbeek area of Brussels. Brussel has issued warnings that although some services have reopened, the public should remain vigilant and avoid high-traffic areas as much as possible.

Update (1:31 PM): After an evacuation early Thursday morning due to a suspicious package of white powder at the largest mosque in Brussels, the potential anthrax alert has been called off. According to Brussels fire brigade spokesman Pierre Meys, the suspicious white powder was only flour: "It was just flour. Everything is negative, the cordon has been lifted." Vehicles remained on the scene as the alert was cancelled.